2021 DeMarini The Goods One Piece Review 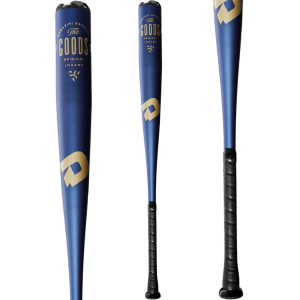 In both USSSA and BBCOR, our hitters liked the bat’s design, its stiffness, and the ball flight when they drilled one on the screws. In BBCOR, it swings on the light side of balanced but even folks who liked balanced+ type swing wights were fine with how it felt. It was light, but not unusably light. The 33-inch, which we measured, is 3% below the average BBCOR swing weight in that length.

Most high school hitters prefer composite or hybrid bats that better feel on mishits. For USSSA, we liked the drop 8 better than the drop 10—that added weight did a to reduce hand sting.

2021 The Goods One Piece Video

2021 The Goods One Piece Video

2021 The Goods One Piece Models


We hit with the 2021 The Goods One Piece from DeMarini in BBCOR and USSSA, captured exit speeds, swing weights, and player feedback. We also compared the bat to similar bats of the 2021 BBCOR and USSSA world. That data is consolidated in our 2021 DeMarini The Goods One Piece review below. In BBCOR, it claims to swing a bit heavier than The Voodoo from 2020 but we didn’t see a big enough change to make a difference.

Hitters who like a stiff one-piece alloy bat preferred The Goods One Piece. Usually, hitters who prefer those types of bats are stronger, elite type hitters that don’t have as much trouble squaring up the ball as they do getting enough power behind it. Those types also want heavier swinging bats which The Goods One Piece is not. This bat accents smaller hitters that like stiff feeling bats with focused barrels.

Dicks Sporting Goods Amazon eBay JustBats
The Goods One Piece in BBCOR is a single-piece alloy bat with a moderately light swing, decent sized barrel profile, and stiff feel. It is, for all intents and purposes, a Voodoo One with a new paint job. The Goods One Piece, not to be confused with the Hybrid The Goods, is built for the middle of the lineup or early lineup kid who wants a stiff feel, likes The Goods One-Piece Look, prefers a lighter swinging bat, and wants alloy in their barrel over composite.
Sizing: 31, 32, 33, 34-inch
Release Date: August 1, 2020
Serial: WTDXG0C21
Bat Type: Single Piece Alloy
Barrel Size: 2 5/8
See other BBCOR Bats

Amazon eBay JustBats
Although more expensive than we like to see single piece alloy bats in the USSSA youth space, we are big fans of the 2021 Drop 10 USSSA The Goods One Piece. It's got a great barrel profile, fantastic feel on hits, and good middle of the road swing weight. It has done very well in our exit speed tests, and we think it one of the better bats in the USSSA market this year. If you like single-piece bats in the drop 10 space, this one is a win. The only real downfall, aside from the fact we think it's $30 more expensive than it should be, is that it only comes in three lengths.
Sizing: 29, 30, 31-inch
Release Date: August 1, 2020
Serial: WTDXG0Z21
Bat Type: Single Piece Alloy
Barrel Size: 2 3/4
See other Drop 10 USSSA Bats

Amazon eBay JustBats
Our hitters liked the drop 8 more than the drop 10. That added weight balance really helped to dampen the sting on mishit balls. But, to be sure, we wouldn't recommend the drop 8 if it were the wrong size. The 2021 Demarini The Goods USSSA drop 8 is a single-piece alloy with a good-sized barrel, balanced swing (for a drop 8), and top-end performance on our exit speed tests. Our review rates it
Sizing: 29, 30, 31, 23-inch
Release Date: August 1, 2020
Serial: WTDXGO821
Bat Type: Single Piece Alloy
Barrel Size: 2 3/4
See other Drop 8 USSSA Bats

There are plenty of single piece alloy bats on the market in the BBCOR and USSSA space. The most popular might be Slugger’s Omaha or Solo. You can also look close at Easton’s Alpha lines, Axe Elite One lines, Marucci’s CAT line, Victus’ Vandals and any number of one off single piece bat manufacturer. It is, to say the least, very difficult to differentiate between other single piece aluminum bats.

Compared to the 2020 The Goods One Piece, there are no changes in the bat’s BBCOR versions. The USSSA 2021 The Goods One Piece is a new model line. However, that USSSA bat is a color up, and marketing reshapes from the Voodoo One with a new end cap and new drop 8. All reasonable ‘upgrades’ from year to year. Rarely is there anything as revolutionary as it might first seem. That’s not a knock. It just is what it is in the bat space.

The 2021 DeMarini The Goods One Piece is a single-piece bat (hence One Piece) with full aluminum construction. It uses an X14 alloy, which DeMarini has put in their top-end alloy barrels of all makes (including The Goods and The Voodoo) for several years now. The bat’s BBCOR versions have a slightly flared knob and should be considered a balanced bat. The USSSA versions are more balanced and do not have a flared knob.