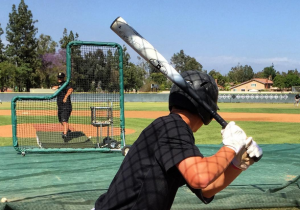 This Trinity T7 reminds us of Old Hickory’s attempt at a single-piece aluminum bat. Both are built by wood bat companies, and their preference for wood bats is apparent in these aluminum bat’s endload and wood-like feel. Both, we believe, replicate wood bats with their stiff feel, and with both, a strong hitter could be successful.

Another more ‘mainstream’ bat the T7 compares well with, would be Easton’s Z-Core XL. We refer to that bat, you may recall from our review, as the aluminum log. It is a favorite among many strong collegiate players. If you can hold swing speed constant, no bat will do more damage than the Z-Core XL. That holds true for the T7, as well. If you can swing it well, you should swing it often.


Trinity bat company, known for their wood bats often used in the pros, recently released an aluminum BBCOR bat. We spent time with the bat in the cage and discussed the bat and its metrics at a Trade Show as well as over email with the folks at Trinity. On the whole, the single-piece aluminum BBCOR bat is a great wood replicator in the sense of an end-loaded, big-hitting stick for the serious player. In more detail, the following is our Trinity BBCOR Bat Review.

If you consider the T7 Trinity BBCOR bat a wood replicator in terms of feel and weight distribution, you will have a good idea of who the bat is for. In large measure, we believe it could replace the wood BP bat some high school or collegiate players use, due to its heavier swing weight and very stiff feel. The additional durability of the aluminum construction is a plus, too.

As such, we would recommend the T7 for game play to stronger player who wants to make their future transition to wood as seamless as possible. This bat, combined with enough strength for bat speed, will do serious damage—truly, as much damage as is allowable. But we do note, only a real ox could swing this bat like it needs to be swung.

For less strong or newer players, the bat might serve as a good over-weighted training bat with good durability and a unique look. The shortest offering is 32-inches, so few high school underclassman will find it in the size they prefer.

eBay
There is not a huge amount of information on the internet about Trinity's T7 Aluminum BBCOR bat, though we did find a little bit of information on Trinity's site directly. We also found their Instagram page helpful in terms of a few images. Amazon has a product link at their site, but it has yet to be reviewed by anyone. Our main source of insight for the bat was our direct use. We hit the bat with several different players under a few different conditions. We hooked up some bat analytical sensors to get a better feel for swing speeds and bat control.
Sizing: 31, 32, 33, 34-inch
Release Date:
Serial: TRINBBCOR2017
Bat Type: Single Piece Alloy
Barrel Size: 2 5/8
See other BBCOR Bats

The Trinity BBCOR T7 aluminum bat is a single-piece bat. If this bat world is unfamiliar to you, you should note that many metal and composite bat companies make multi-piece bats. Most common in the high school ranks are two-piece composite bats. Others often use hybrid bats that consist of a composite handle and an aluminum barrel. Others, more recently, are single-piece hybrid bats that use an aluminum bat, but an extended composite end cap. Each of these innovations, at least in part, produces a lighter swinging bat than one that is simply full of aluminum.