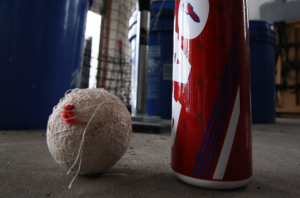 Rude American, based in Las Vegas Nevada, is most know for their single piece aluminum MOAB set of bats. These bats have a speed and power version that have a hand and end load respectively. In 2019 they updated performance on the bat.

From our near endless hours in the cage with Rude American Bats and the other 16 or so manufacturers vying for the public’s dollar, we’ve noticed that most players who prefer a single piece aluminum bat also prefer a bat which has an end load. It is a rare occasion that a single piece aluminum alloy bat lover wishes for a balanced swing.
There are many, on the other hand, who prefer a balanced or light swing and like the hot out of the wrapper performance as well as the ping sound of an aluminum barrel. But those almost always, at least it has been or observation, prefer a two piece hybrid bat with a composite handle and aluminum barrel instead of the one piece bat with it’s accompanying hand sting. 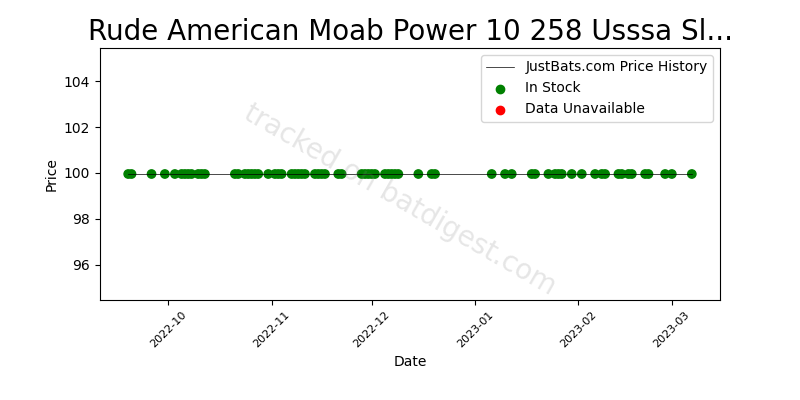 There are several bats that use a single piece aluminum design. Bats like Slugger’s 519 Omaha, Rawlings VELO and Marucci’s CAT 8 are just a few examples.

The first version of the MOAB  looked exactly the same cosmetically. They did not change the graphics on the newer bat. As far as we can tell the major differences deal with the durability. There were a few complaints you could find online about the bat’s end cap and an occasional denting. The 2019 version claims to have solved most of those issues—although all bats struggle in this regard.

This is probably a long way of pointing out why we tend to prefer the Power Engineered versions of the Rude American MOAB over the Speed. It wasn’t so much the Speed lacked any prowess or ability at the plate—by all measurements we took it’s a legit bat with solid out of the wrapper performance. But, players who need a light swing also tend to often prefer the sting dampening that comes from two piece bats and the added barrel size composite barrels usually offer.

Our Recommendations for the Rude American MOAB

As such, we’d recommend the Power Engineered MOAB, especially in the drop 5 and BBCOR, to any player looking for serious power that is capable of wielding a bat with serious gumption. Do know the bat will come with the requisite potential for feedback on the hands (i.e. sting) but such is a small price to pay for those looking to get the best transfer of energy to the ball in a single piece aluminum bat.

The Speed Engineered bats should find a home in the unique case of a hitter looking for as much power as possible—and can deal with the feedback—but lacks the strength to swing the Power versions. In fact, we’d probably suggest they look at a shorter sized Power to see if that swing weight is more in their wheel house than a longer sized Speed.

The speed engineered bat’s swing weight is very similar to the Marucci CAT 6. They should be classified as balanced bats. We suspect that most players will gravitate more towards these. The BBCOR (Green) was our favorite bat of the bunch.

The power engineered bats from Rude American swing with a weight more like the DeMarini Insane. These should be considered moderately endloaded bats built for the hitter who appreciates the balance of the bat more towards the end cap of the barrel during swing. The 2 5/8 senior barrel (second one down) was our favorite in this bunch.

In early 2016 Rude American added two drop 5 bats in the senior league space to their offering. We’ve now spent several hours in the cage with the end loaded version (Power Engineered) and balanced version (Speed Engineered) of the drop 5 Rude American MOAB and are pretty confident in claiming they are our favorite bats in the lineup. It’s as if single piece aluminum bats were made to be a drop 5 in the senior league or big barrel space.

We dare say anyone in the drop 5 space looking for as much power as possible and are okay, or maybe even prefer, the hand sting associated with a single piece bat should check out the drop 5 in the Power Engineered (Black) version of the bat.