Ever willing to keep our ear on the ground for new baseball and softball bats, we recently ran across the RicoGloves Instagram account. There, we were excited to read the announcement for a line of custom baseball bats. Although not released until December of 2017, we will begin our write-up compiling insights on the bats. Hence, this Rico Bats review entry which will be updated as we gather more information and get a chance to hit the bats. 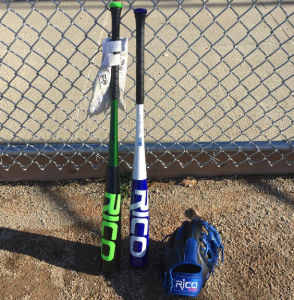 We are confident Rico Bats will claim their bat performs as well as any other brand on the market. They must, after all, pass the same tests as other models. However, without the bats in hand, nor any player feedback available at the moment, it would be impossible for us to verify the claim.

Nonetheless, Rico’s line of bats will be customizable—a feat accomplished by DeMarini a little while back. Different than DeMarini, and what we have gathered from Rico directly, the pricing options will be much more palatable for many parents than DeMarini’s custom side. Combine a more affordable price point with a custom bat design and you have our attention.

The custom build site is not live, but the second it is, you can expect an update here.

Information is limited in terms of exact sizing options, but we have at least seen pictures of a drop 8 in a big barrel as well as a BBCOR drop 3.

At release, there will be two versions of the RICO Bat. The first is a single piece aluminum bat with a stiff feel and a big hit. The second is a two piece hybrid with a composite handle and aluminum barrel.

Without hitting them yet, or hearing from any players who have, it is difficult to claim what these bats are like. Our first thought would be the WARSTIC model of bats, which have a focus on design and submit, rather cheerfully, to the idea that bat standards have made all bats equal. Although designed impeccably, the Warstic’s do not do custom.

The only other custom aluminum barreled bat company would be DeMarini’s Custom build. Their price point and focus on superior performance—if at least in marketing—do make it a different type of purchase. But, if you are looking for a custom made aluminum barreled bat, then only RICO and DeMarini have the offering.

We will withhold judgment on the bats until we get a chance to swing them and gather player feedback. If we are lucky, that should be close to December 1,  2016. As that occurs we will be sure to update this page.

We speculate that those looking for a custom made bat for the holidays will be salivating as this Rico Bats Review develops.

Very cheap material, I bought this bat for my jr college season 2017, it lasted only about 3 months, The end cap attachment down inside the barrel broke apart and every time I swing it would pop out. Very poor workmanship. I threw away money on this bat.