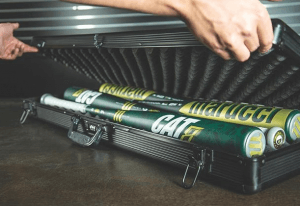 It includes, among other things, a barrel with a money shaped theme. Up close on the barrel there are bills you can see. It also comes in a green and gold. The bat, which is a replica of the CAT 8 in BBCOR and USSSA, is a single piece aluminum with advanced knob and barrel tech. It prices out exactly like the CAT 8, which we think is fantastic. It easily makes our gift guide for ball players 2018. (See more images on Marucci’s IG account).


*These are basically sold out at this point.***

For the 2018 holidays, Marucci has released a special colorway on the CAT 8.

On the whole, we are huge fans of the CAT 8. Those looking for a more traditional feeling single piece bat (not some two piece composite “magic”) will appreciate the honest feedback in a the CAT 8. The barrel size is remarkable considering the all aluminum design. The bat’s knob has a dampener (proprietary) that dampens sting considerably.

The most comparable bat is likely Marucci’s GS25. That was a limited edition Alex Rodriguez bat also built on the CAT 8 chassis. But, that bat didn’t come in USSSA versions like the CAT OTM has. And, of course, the CAT 8 is very similar in the sense it is the same bat just a different color.

But, outside of the Marucci like up, take a closer look at a bat like the Rawlings Velo or Slugger 518 Omaha.

The CAT 8 OTM is a single piece bat built with several unique features that make it feel different than traditional single piece bats. Including technology in the knob that helps dampen sting. And, too, variable thickness in the walls to extend the sweet spot, lower swing weight and increase the barrel size.