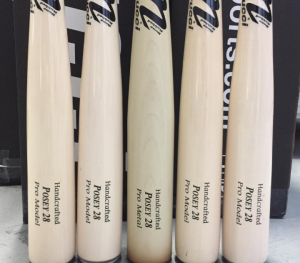 Marucci released what we believe to be the most exciting bat for the 2018. At least in terms of aesthetics, it has taken the game to a different level.


The bat, with a CAT 7 chassis, is designed to look identical to the wood bat model Buster Posey himself uses.  It is called the Buster Posey28 Pro Metal Bat.

In pictures the bat looks impressive, but in person the bat is one of the best looking bats we have ever seen. It feels smooth and looks clean. And even up close it is hard to tell it is not wood.

At the risk of giving specific recommendations in general terms, we’d suggest that any player who can find a Buster Posey Metal bat in their size will really like it. It has a great sound, outstanding user feedback in terms of performance and a more reasonable price point than many other 2018 top shelf BBCOR/Big Barrel bats.

Those who really like a buttery two piece smash might find the Buster Posey Metal a bit stiff. And those who think a ping sound from a bat that looks like wood is too weird might also need to look elsewhere.

Inside the brand, Marucci makes two very similar bats when compared with the Buster Posey Metal. They are the CAT 7 in the Black Camo and the original CAT 7. These bats are, with the exception of aesthetics, replicas of each other.

Outside of the brand a comparison to the Buster Posey Metal is a more difficult task. But, if we had to find one, we think either the DeMarini Voodoo One or the Rawlings VELO might be good choices. Both of those focus on a balanced swinging single piece aluminum with a good sized barrel.

Granted, both of those bats, especially the VELO, swing lighter than the Buster Posey Metal. But, in terms of a close cousin, we could put them in the same class.

The Buster Posey Metal bat is built just like the CAT 7. If you want an in depth discussion you can check out that review here.

In short, the Buster Posey Metal uses a single piece aluminum bat with variable wall thickness to extend the length of the sweet spot and bring down swing weight. By all accounts the bat succeeds beautifully at this.

The other unique feature is the anti-vibration knob that is found ONLY in the BBCOR version of the Posey 28. Inside the knob sits a rubber sting dampener that helps remove some of the vibration single piece bats are known for. The Big Barrel Drop 10 version of the Posey28 Metal does not have the AV2. If you want that feature in the drop 10 check our Marucci CAT 7 Drop 10 Review.