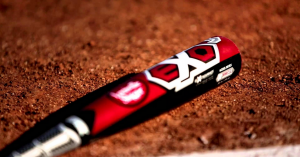 In 2013, Slugger released the ExoGrid 3 in an attempt to (1) lighten the swing weight of the ExoGrid 2 and (2) add some durability in the transition.

The ExoGrid 3 is a lighter swing weight than the 2 but that didn’t mean much because the ExoGrid 2 is a beast to swing. The ExoGrid 3 should be considered a slightly endloaded bat. In fact, it weighs out almost exactly like the 2015 715 Select from Slugger.

To improve durability and the stiffness of the ExoGrid 2, Slugger added a single composite sleeve in the transition point underneath the barrel for the ExoGrid 3. This did allow for a stronger bat and stiffer bat in the handle which produced more power.


First, a bit of ExoGrid genealogy. The Louisville Slugger ExoGrid has been around long enough to produce three versions of the bat: the original ExoGrid, ExoGrid 2, and the Exogrid 3. The original was not a BBCOR bat. The Exo 2 and Exo 3 were. Today Slugger does not produce these bats. In 2014 Slugger abandoned the ExoGrid line for the top shelf Attack/Raid line–which is now known as the 915/715 respectively. (These bats are not to be confused with the ExoGrid 5150 from Rawlings)

We would recommend the ExoGrid 3 for those hitters who: like a one-piece aluminum bat with a lot of stiffness and slight end-loaded feel; are okay with a heavier swing weight; can find one for a smoking deal. You can still purchase the ExoGrid 3 new wrapper if you look in the right places.

eBay
The ExoGrid line of bats from Louisville Slugger is always a popular review request for us on our twitter account. We don't know if its popularity is because Jameis Winston and Russell Wilson used it in college or the fact that the bat was famous for winning a couple NCAA titles. Whatever the case, folks want an ExoGrid review, so here goes.
Sizing: 31, 32, 33, 34-inch
Release Date: June 1, 2013
Serial: LSEXOGRID3
Bat Type: Single Piece Alloy
Barrel Size: 2 5/8
See other BBCOR Bats

Unlike the 915 and 715, the ExoGrid had a one-piece aluminum AC21 Alloy shell that was reinforced with composite pieces inside the barrel. In some of those reinforced places (like around the barrel to handle transition), the ExoGrid had pieces of its aluminum shell cut out to show the composite backing. This gave an impressive-looking grid pattern. Hence, the name, ExoGrid.

In the end, the idea of an all-aluminum bat with composite inserts post BBCOR did not appear to take shape like the two-piece, hybrid, or straight aluminum single-piece designs. (Rawlings says what?)

It would be fun to see Slugger, one day, resurrect the graphite grid and cut out the pattern from the original ExoGrid in the new version line of bats. Maybe they could shout out to the past with a silver-trimmed limited edition 2018 line called the 918 ExoGrid Prime? I’ll go ahead and put my name on the waiting list for that one.

The idea behind the composite backing with missing pieces of aluminum was to create a lighter swinging bat with a stiff transition point. Less metal meant less weight and a if the transition was stiff then that would allow the barrel to create a larger trampoline effect. As a result, the ExoGrid was marketed as a balanced swing with a stiff handle and enormous pop.

With the original ExoGrid we found those claims to be, roughly speaking, the case. The ExoGrid transition point was stiff and did push a lot of the mishits to your hands, but a jack in the sweet spot was reason enough alert the FAA. The bat by today’s standards wouldn’t be considered particularly light, but it definitely had a nice smooth balance to it. The Original ExoGrid had a long run as it was first produced in 2007 and wasn’t really changed much (outside of a paint job or two) until 2012 when BBCOR standards came into play.

In theory, the bat was still going to be a light swing with the barrel also now ‘undergirded’ by light composite bands. However, our measurements never proved that the light swing weight claim was the case—especially by today’s standards. In fact, the ExoGrid 2 is one of the heaviest swing weights we can find in the BBCOR-certified bats.