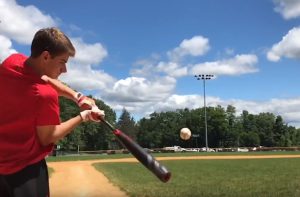 There have been atleast a few complaints about the bat’s long term performance. We don’t think it too concerning, but the bat isn’t getting the rave some other more proven models are.

As of March 2019 the ADV (and every Easton BBCOR bat) came off of minimum pricing. It is the earliest we have seen any premier bats come down.

As far as we can tell, one of two things. First, the bat’s sales have been flat or lackluster and Easton is looking to drive some inventory before other flagship bats drop their price. Second, it’s possible Easton is looking to launch a few things earlier this year to get the ball rolling and a jump on the 2020 line.


Easton’s top end bat for 2019 is called the Project 3 ADV. The ADV comes with a few features we’ve yet to ever see on other bats including a Power Boost knob and an improvement in the connective piece.

In some sense it’s worth thinking of the ADV as a newer version of the Ghost X from 2019. It is a two piece composite with a big barrel, light swing and really great feel on contact. Granted, it only comes in BBCOR at the moment. But improvements like the power boost knob make it worthy of a new model and name.

In the big barreled and light swinging two piece composite space there are a few real high end options. All bats, mind you, in this category are the most expensive. Others to consider are Rawlings Quatro Pro, DeMarini’s CF Zen and Slugger’s new Meta 9. Each of these bats have their own story and, in their own right, each are good. We suggest you read through the reviews, watch some vidoes and get a feel for what type of bat you’ll like more. Then, when in doubt, flip a coin.

You can see more details in our bat construction section on this review.

Easton’s top end bat for 2018 is the Easton Ghost X. That bat was the new version of the famed Easton MAKO. These bats have dominated much of the two piece composite market. They’ve used a big barrel, light swing and real good feel on hits and mishits to become one of the preferred two piece composite bats in the market.

The 2019 Project 3 ADV significantly upgrades on the Ghost X. Insomuch that a new name and line is warranted. Here are a few of the bats new features:

Although the Easton Ghost/MAKO rated out as one of our favorite BBCOR bats, the changes to the new Project 3 ADV are legit. We are not able to determine if the price difference is worth it on your budget. Our general recommendation is that last year’s models bats are great buys when they price out well (August through October). But, in terms of a side by side (assuming price is equal) we’d buy the Project 3 ADV.

There are several features worth noting on the 2019 Project 3 ADV. Compared to the last year Easton top end two piece composite (the Ghost X) there are considerable changes. Here are a few: