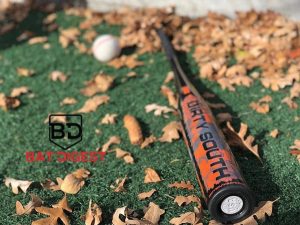 Generally, our hitters liked the pop off the bat when they squared one up. Few bats did better in those terms. And, despite being a one piece, the BBCOR KAMO felt manageable on mishits too. We think the heavier swing weight contributed to that as well as a proprietary composite DSB uses. Bigger, stronger hitters who want a stiff feeling bat that transfers max energy to the ball will like the KAMO. As well, those looking for something a bit different, and want to stand out, might find the Dirty South Kamo just what the doctor ordered.

Note: Dirty South does NOT claim this is a 2019 bat. That is fair and reasonable. That said, our site uses a hierarchical structure that requires some year categorization because just about every other company does use the year. As such, forgive the references to “2019” below. We simply want our readers to know this bat is relatively new and they wouldn’t be able to find it in our database and searches without a year attached.


After discussing with several players that have used the BBCOR Dirty South KAMO and measuring its exit speeds and swing weights, we write this review.

Both the Kamo and Power Carbon are first year iterations (meaning they have no predecessors).

The other bat, which the Kamo reminds us of, is the Combat Maxum. The Maxum, you recall, is a single piece full composite bat. Combat went defunct and was absorbed by Easton. You can still find a few of the older models floating around. Some are still new in wrapper.

Also, new for 2019, Louisville Slugger upgraded their Catalyst into a bat called the Prime One. This is a single piece composite bat. However, it does NOT come in a BBCOR version.

DSB claims the KAMO’s impressive feel is created by a unique composite built with a softer feel. We don’t know have any particular insight to the manufacturing process of their composite versus another companies, but our experience with the bat did feel kinder on our hands than we first expected. In fact, of the 6 hitter we had use the Kamo BBCOR not a single one of them complained about hand sting.