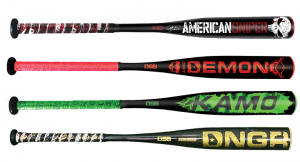 We hit with the Dirty South DNGR and KAMO BBCOR BBCOR Bats. We compared them to the Easton MAXUM as well as the Slugger Meta in head to head competitions. Results were similar in terms of exit speeds although the player preferred the 2020 Meta. As well, the DNGR and KAMO swing heavily for the sizes we tested them in. In fact, the KAMO was one of the heaviest swinging BBCOR bats we’ve yet swung in 32-inch BBCOR.


For the Dirty South KAMO and DNGR the players loved the barrel size. These single-piece composite bats have some of the largest barrel profiles in the business. As well, the stiffer feel of a single piece gave good feedback.

Unlike the MAXUM, which is also a single-piece composite bat, the KAMO and DNGR swing very heavy. So, if you are looking for a single piece composite bat but would like a real end load in BBCOR then the Dirty South line of BBCOR bats should do you well.

The most comparable bat, in terms of makeup, is the 2020 Easton MAXUM. That bat is also produced directly by JustBats in one called the Combat B2 and an almost unheard of company called the Army of 9. Each of those is single-piece composite bats with big barrels.

The biggest difference, however, is that the BBCOR versions of Dirty South bats are end-loaded. The Maxum and B2, on the other hand, are some of the lightest swinging bats on the market.

Dirty South makes no bones about producing the same bat with different designs. The KAMO, DNGR, Sniper, and Dirt Demon are all the same bats. There isn’t anything different between them other than the paint job.

This isn’t deceit because DSB is upfront about it.