BamBooBat Review | Why Use A Bamboo Bat? 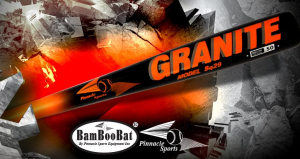 Want the softest feeling “wood” bat on the market?


A BamBoooBat might be your best bet. The bat isn’t wood, technically, it is a grass. So, you’re not only saving the rain forest but you’re also getting a super smooth feel. The bat’s have a lot of give at contact with will make your hands and thumbs grateful—especially on mishits. Bamboo is also remarkably durable. Of course the bats can break. But when compared to other “wood” bats this thing is a steel trap.

There really isn’t anything comparable to Bamboo. Sure, You might find some sucess with an Ash bat–which run with a little more give than something like a Maple bat. But, in terms of how soft they feel on contact you just can’t beat a Bamboo bat in the “wood” bat space.

There are, of course, other companies that make Bamboo bats instead of BamBooBats. Mizuno, among others, have a few options. Check the market on some major vendor sites with searches like this.

BamBooBat are made from, wait for it, bamboo. Bamboo, you probably know, is a grass and not a tree. In other words, it isn’t actually a forest your killing by trying to hit dingers. This also explains the relatively inexpensive nature of bamboo bats.

The bamboo is laminated together and then formed into the shape of a bat. Throw on some polish and coating as well as a cool paint job or two and you have a whole host of bats in the BamBooBat line up.