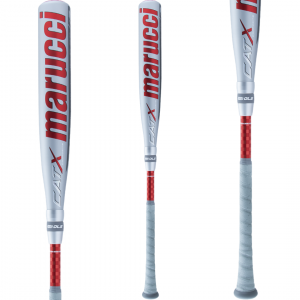 Marucci is releasing an upgraded bat for 2021 called the Marucci CAT X Composite. The bat is a two-piece composite bat found in USSSA and BBCOR. The bat will compete directly in a competitive two-piece market against bats like the META, CF, ADV, and Quatro Pro. According to some of our hitters, the bat has a balanced swing, a huge barrel, and hits absolute rockets.

Note: Bats and models denoted with an asterisks (*) are still in progress. Current rating reflects our best estimate. Expect updates.


Our hitters like the big barrel, smooth swing, and fantastic feel of the 2021 Marucci CAT X Composite. The drop 5 CAT Connect competes with the best in the business and, for 2023, adds a 33-inch size too.

Marucci Amazon JustBats
We think the Marucci CAT X Composite is as good as any two-piece composite BBCOR on the market. It hits the crap out of the ball and compared to bats like the Slugger META or Rawlings Quatro, gets great feedback from hitters and hittrax data alike. If you're in this market of higher end two piece composites, which a lot of younger and smaller BBCOR players should be, then this is the bat to care about.
Sizing: 31, 32, 33, 34-inch
Release Date: August 10, 2022
Serial: MCBCCPX
Bat Type: Two Piece Composite
Barrel Size: 2 5/8
See other BBCOR Bats

Marucci Amazon JustBats
We don't know much about the CAT X Composite in USSSA Drop 5, but we do know its coming and we can't wait to hit it. When it does drop and we can get our data gathered on the bat we will update this page.
Sizing: 30, 31, 32-inch
Release Date: August 9, 2022
Serial: MCBCCPX5
Bat Type: Two Piece Composite
Barrel Size: 2 5/8
See other Drop 5 USSSA Bats

Marucci Amazon JustBats
We don't know much about the CAT X Composite in USSSA Drop 8, but we do know its coming and we can't wait to hit it. When it does drop and we can get our data gathered on the bat we will update this page.
Sizing: 28, 29, 30, 31, 32-inch
Release Date: August 9, 2022
Serial: MCBCCPX8
Bat Type: Two Piece Composite
Barrel Size: 2 5/8
See other Drop 8 USSSA Bats

The idea of a two-piece composite bat with a HUGE barrel is common in the USSSA space. Companies like DeMarini and the CF Zen, Easton and their Ghost X (Mako), Rawlings and their Quatro have been living there, and thriving there, for quite a while. The CAT Composite reminds us most of a nearly unheard of bat in the Mizuno Ghost in terms of barrel size. However, as of 2018, the Mizuno Ghost was only a USA Bat. Marucci has yet to get into the USA space. If we compare construction and drop sizes, then bats like Easton’s Ghost X and DeMarini’s CF Zen fit a close competitor to the CAT Composite.

The 2023 Marucci CAT X Composite is a revamped version of the rather popular 2021 Marucci CAT 9 composite. The changes are significant; here are some bullet points explaining them.

Marucci’s CAT Connect is a two-piece composite bat built with a HUUUGE barrel and nice connection piece. The connection piece, which helps absorb mishit balls’ sting, is the same one used on the high-end BBCOR CAT X Connect.