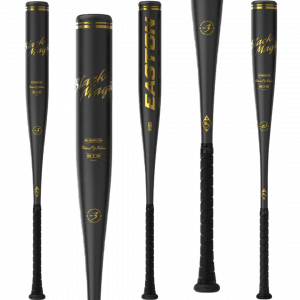 The 2023 Easton Black Magic is a single-piece alloy bat that is a repaint of the 2022 Easton ALX. The Black Magic is a throwback version with a nostalgic paint job reminiscent of the mid-1990s bat that many players’ parents may have swung. More than a few players are used in the college world series.

As with the ALX, the Black Magic is made for a hitter who likes feedback, a single-piece bat, and a bit of an endload. The USSSA versions of the bat are $50 more than the ALX, so it doesn’t seem to make much sense to pay more unless you really love the paint job, and you might. However, there is NO drop 5 in the ALX like there is in the Black Magic. As well, the BBCOR version is the same price as the ALX.

Other similar bats are single piece bats with decent swing weights. Look for a bat like DeMarini’s The Goods One Piece or Marucci’s CAT 9.

There was no 2022 version of the bat, but take a close look at the 2022 ALX if you want to see a similar older bats than the Black Magic.

The Easton Black Magic for 2023 is a single-piece bat with a Power Boost Knob.