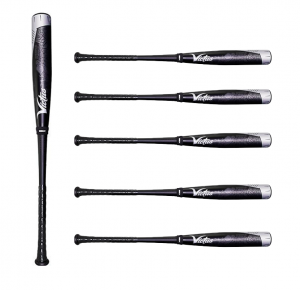 The 2020 Victus Nox is a hybrid bat that comes in BBCOR and, in May of 2021, a drop 10, 8 and 5 USSSA. The Nox complements the Victus Vandal—which is the premiere Victus bat and a light swinging single-piece aluminum. Of all the data we gathered on the different versions of the NOX, we found the swing weight lighter than we expected. Our measurements on the Nox put it on the lighter side of balanced—which is a bit different than other takes which consider a bit heavy. But, we’re confident in our swing weight scales and think the Nox should be considered a balanced bat—not heavy, not light but just right.


Generally, mid-range swinging two-piece hybrid bats perform much like the Voodoo or, these days, The Goods. The Nox also uses the same tapered barrel wall found in other bats like the Vandal, CAT 8, Axe Hyerwhip, Rawlings VELO, and 5150s.

Victus added weight to the barrel to give it a heavier MOI. In BBCOR, we find the bat to be an average swing weight—not end-loaded. It is more balanced than it is end-loaded or hand-loaded. The drops 10, 8, and 5 in the USSSA allow you to dial in what kind of swing weight you want. The 29-inch drop 10 is quite a bit light. The 32-inch drop 5 is a log. As such, you can dial in where you want it. Compared to competing bats with the same length and weight categories, the swing weight is about the average in the industry.

By way of general recommendations, the bat is built for the player that wants the reliability of an alloy barrel, the smooth feel of a two-piece, and a price point that’s reasonable compared to other high-end bats. Although it’s year one, feedback so far has been very, very good in all its models.

Dicks Sporting Goods Amazon eBay JustBats
The Victus Nox, for a first run bat, is fantastic. They claim the bat is endloaded, but our measurement showed it to be about average in the 33-Inch BBCOR market. The two-piece connection gives a semi-flexible feel on bad hits and feels great when you really dial it in. In terms of exit speeds, the bat did as well as anything in the BBCOR space---as most BBCOR bats perform really close to the limit. The Nox is for a hitter who wants a two-piece hybrid bat with a balanced swing. Victus uses a two-year release model, so the 2021 is the same as the 2020.
Sizing: 31, 32, 33, 33, 34-inch
Release Date: November 1, 2020
Serial: VCBN
Bat Type: Hybrid
Barrel Size: 2 5/8
See other BBCOR Bats 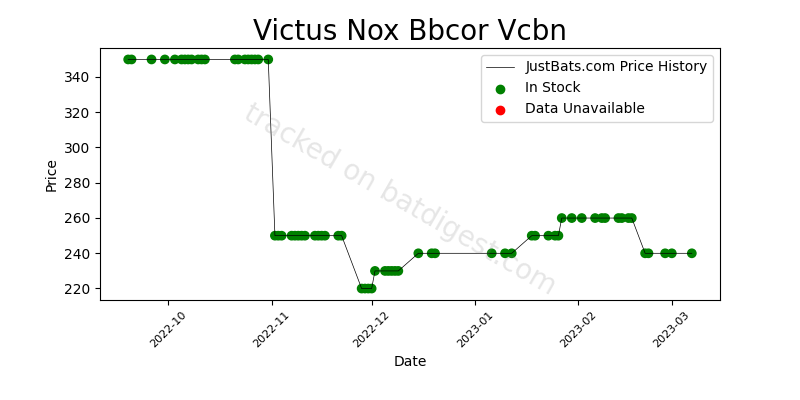 Dicks Sporting Goods Amazon eBay JustBats
The 2021 Victus NOX is a new addition to the USSSA space whose drop 10 is a balanced swing, easy connection piece and great feel. Players really prefer the two piece hybrid design and although it swings a bit heavier than a bat like the CF, it feels great, kids love it and it hits the ball fall. If you want a more durable option of a bat that isn't called the Marucci CAT 9 Connect, then the drop 10 USSSA Victus Nox is a legit choice.
Sizing: 28, 29, 30, 31-inch
Release Date: November 1, 2020
Serial: VSBNX10
Bat Type: Hybrid
Barrel Size: 2 3/4
See other Drop 10 USSSA Bats 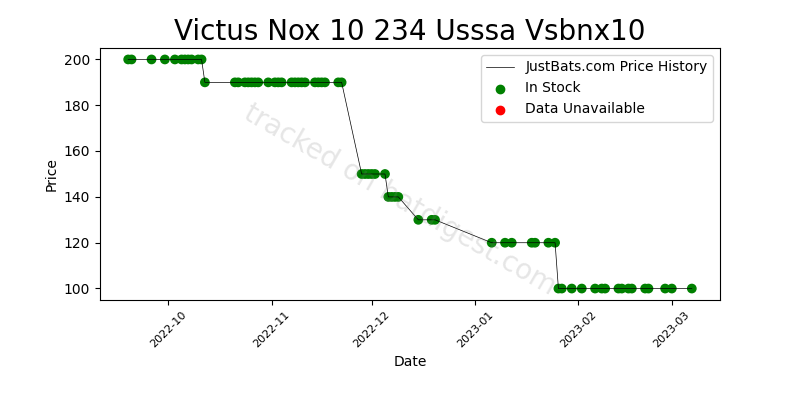 Dicks Sporting Goods Amazon eBay JustBats
Victus Nox was once only a BBCOR bat. Now, it's a USSSA bat too in a drop 10, 8, and 5. The drop 8 version, featured here, is a two-piece hybrid bat with a big barrel, smooth connection on impact, and uses a unique threaded connection to help dampen stings on mishits. The alloy barrel is ready to go out of the wrapper and the drop 8 runs a bit heavier than your traditional composite two-piece bats (like the CF). But, hitters who want a durable two-piece hybrid in a drop 8 and don't want the Marucci CAT 9 Connect (Marucci also owns Victus, FYI), should really like the Drop 8 Nox. We think the Drop 8 is the sweet spot of the USSSA Victus line and would push most in that direction if they can swing it. The wide range of sizes and player feedback make it the best-reviewed Nox of the lineup.
Sizing: 28, 29, 30, 31, 32-inch
Release Date:
Serial: VSBNX8
Bat Type: Hybrid
Barrel Size: 2 3/4
See other Drop 8 USSSA Bats 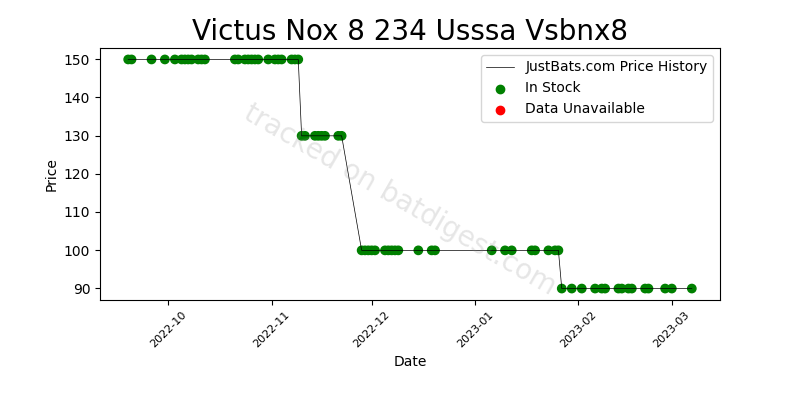 Dicks Sporting Goods Amazon eBay JustBats
The drop 5 Nox is a two-piece hybrid bat built with the big hitter in mind. Those in the space not willing or wanting to use the famed CF drop 5, and like the idea of an aluminum barrel that is ready to go out of the wrapper and durable too, should really like the Drop 5 Nox. It's a big barrel with a moderately stiff connection, drop 5 average swing weight and if you can square it up will absolutely fly.
Sizing: 30, 31, 32-inch
Release Date:
Serial: VSBNY5
Bat Type: Hybrid
Barrel Size: 2 5/8
See other Drop 5 USSSA Bats 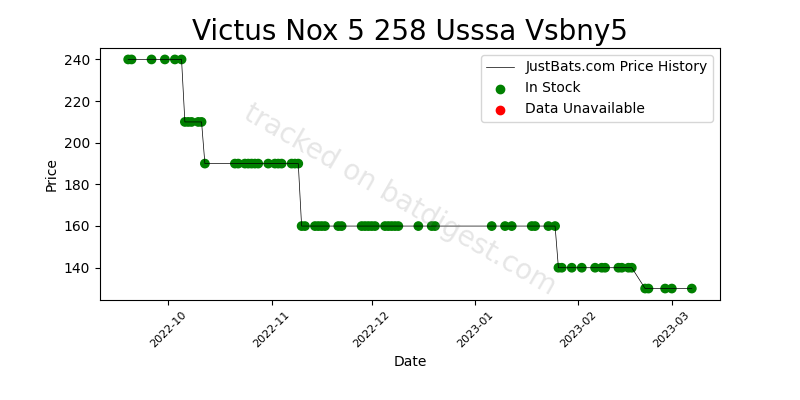 If you want a balanced hybrid bat in BBCOR, the best place to start looking is at DeMarini’s Voodoo Balanced. The Voodoo has dominated the light swinging two-piece hybrid bat space for going on a decade. Now, as the Voodoo morphs into The Goods, and as the Voodoo name gets shelved, we look forward to seeing how a bat like the Nox works out.

For USSSA bats, the most comparable hybrid is Marucci’s Cat Connect series of bats. You can also check out The Goods or the Select series from Slugger.

There is no version of the NOX from 2019 or 2020. 2021 NOX will be the first time Victus releases a two-piece hybrid bat to the market. They claim they have been working on it for eight years—and that might be true considering they were purchased by Marucci at that time as well as, now, Marucci getting purchased by a more prominent conglomerate.

The Victus Nox is a two-piece hybrid bat. Meaning, the handle of the bat is composite (plastic), and the barrel is aluminum. Hybrid bats are typical. Unique to the NOX, though, is its variable wall design. The inside of the barrel has different levels of thickness. The variable wall thickness, as they call it, allows to spread out the length of the sweet spot, keep the swing weight down, and extend the length of the barrel. Several other bats do this, too, including the Marucci CAT 8 line of bats as well as the VELO from Rawlings.

Oddly, the NOX claims to have added more mass to the barrel. So, it intends to be an end-loaded bat, not a light swinging one. We will be able to tell better when we get one in hand here in the coming weeks.