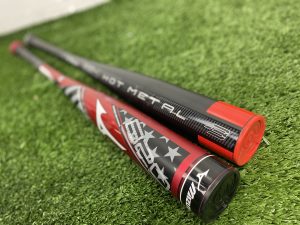 Our hitters loved the exit speeds. The feel on the bat was good, but nothing to write home about. If you hit one off the end cap, you for sure felt it. But, that’s the type of feedback some players prefer. In terms of straight exit speeds and overall performance in BBCOR, the B21 performed like highly recommended Rock Star.


Despite a lackluster performance at the box office for BBCOR bats, Mizuno continues to pump out good content–especially in the Mizuno Hot Metal series. We’ve hit the 2021 B21 Hot Metal from Mizuno with three different hitters so far. Each is impressed. In particular, to the exit speeds, they can generate when compared to other name brand bats. We spent time with the 33 and 32-inch in BBCOR and write our review of those bats below. In time, USSSA and USA bats might be coming out too, and we’ll add that to our analysis when we get it.

In as much as it is a heavier swinging bat, and the fit is just about everything in BBCOR bats, do know you are getting one that’s a bit more difficult to swing than you might hope. See our full list of BBCOR bat swing weights here.

JustBats Amazon eBay JustBats
For a bat most have never heard of, we think Mizuno's BBCOR Hot Metal is as good as single piece alloys come. It has a good-sized barrel, a nice and slightly above average swing weight, and performs as well as any BBCOR on the market. If you want a single piece alloy off the beaten path with a good sound and decent price point, then the 2021 Mizuno Hot Metal could be your trick.
Sizing: 31, 32, 33, 34-inch
Release Date: August 1, 2020
Serial: BB21HM
Bat Type: Single Piece Alloy
Barrel Size: 2 5/8
See other BBCOR Bats

There are plenty of single-piece aluminum bats with a big swing on the market today. Off the beaten path, you can find a bat like the Widowmaker from Anderson. In more traditional routes, look for something like the Omaha or 5150 from Rawlings. As well, our hitters like the Bonesaber from Warstic. Each of those bats listed does a great job on top-end exit speeds for those who can wield them well.

Also, the B21 is a lot like a CAT 8. Both have variable wall thickness and use a single piece of aluminum for the entire bat. Of course, the CAT 8 has some sting dampening technology in the handle, but in terms of barrel and performance, we think they are very similar.

Compared to the 2020 Mizuno Hot Metal, there have not been a lot of changes. It is still a single piece aluminum bat with a big barrel and end load. Expect similar feel too. In either case, expect big hits if you can handle it.

The Mizuno B21 Hot Metal is a single-piece aluminum bat made from a single wall of aluminum. The bat wall adjusts it’s thickness as it moves from the center of the bat to its outsides. This helps increase bat performance outside of the dead center of the bat. Several companies, including the CAT 8 from Marucci and Velo from Rawlings, use a similar tactic.

B20-HOT METAL BBCOR Baseball Bat combines Mizuno’s powerful HotMetal™ single-wall aluminum alloy with innovative CorTech™ technology, which adjusts wall thickness across the barrel to create a high-performance bat with an aggressive sweet spot. Engineered details like an Optimized End Cap create a booming sound, while also increasing the size of the sweet spot to give you the hottest one-piece bat in the game. (source)