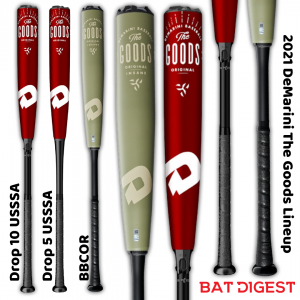 On the shortlist of most anticipated bats for 2021 stand The Goods. This bat had considerable success despite COVID-19 in 2020. It reached a hype level few have achieved. Although the bat was good to a great performer, it still isn’t for everyone. In BBCOR, save the paint job, it is the same bat as the 2020 version (plus an updated end cap). DeMarini adds a USSSA drop 5 and 10 to the mix as well. The BBCOR is $50 more ($399), the USSSA is $20 ($279).

Our hitter’s love the feel of The Goods. Despite its end load, a lot of younger and smaller players think it is the right fit for them. In terms of data, we have yet to see any player hit The Goods with as much success as they percieve. It is, after all, a BBCOR bat limited by a pretty rest… Jump to the full review.

Have a question about this bat? Ask away and we’ll get you an answer.

Our hitter’s love the feel of The Goods. Despite its end load, a lot of younger and smaller players think it is the right fit for them. In terms of data, we have yet to see any player hit The Goods with as much success as they percieve. It is, after all, a BBCOR bat limited by a pretty restrictive standard that a lot of companies also reach in their bats. And, frankly, has been reached by the Voodoo line for several years now.

As well, hitters believe the pop and performance of The Goods is above average despite no evidence of that reality. The bat sounds right, feels right and has reached a certain level of groupthink claiming its one of the best of all time. This does not mean the bat is not recommendable.

The BBCOR 2021 The Goods is built for big hitters that want an end-loaded bat and prefer a stiffer feel in their hybrids. That isn’t everyone. As well, if you need a bat that requires no work in, is sure to produce BBCOR exit speeds right a the limit, then the 2021 BBCOR The Goods could be for you.  The USSSA version in drop 10 is the USSSA Voodoo updated, but the drop 5 uses the same stiffer connection as is found on the BBCOR version.

The 2021 The Goods is built for stronger hitters that prefer end-loaded bats. With respect, we think it’s strange to make a 32″ bat in an end load–as those who need 32″ bats should swing balanced 33″ to get the extra inch. If that is you, look closely at a Voodoo Balanced from 2017 through 2020. But, if you’re a heavy hitter in the 33 to 34″ bat range, The Goods will produce what you want.

As well, the 34.5-inch option is new to the mainstream BBCOR bat space. We think several players will be grateful for the added half inch on what they percieve as the right big bat for them.

The most significant difference, at least at first blush, is the addition of the 34.5-inch version of the bat. Other than that, the bat’s only change is the paint job.

There isn’t anything to justify the price jump other than the hype the bat received in 2020. Despite performance in line with other DeMarini Voodoos from year’s past, the perception of the 2020 The Goods was through the roof. When it ran out of stock from major retailers, the secondary market price on the bat was reaching $600.

We can’t blame DeMarini for understanding the economics of it all. If people are willing to buy a bat at $600 why would they sell it at $349. They aren’t a charitable organization after all. And, the higher initial price point keeps bat flippers, who buy up all the inventory to resale latter, at bay too.

2020 DeMarini The Goods Review: Endloaded, Stiff, Big Hitting. We put the 2020 DeMarini The Goods two piece bat in the hands of 3 serious BBCOR ball players. Each found the bat to swing heavy (in a good way), feel great and look fantastic. We also watched many NCAA 2019 College World Series players give it a shot. The bat is a great shift from the Voodoo Insane of 2019 and is clearly built for the big hitter who still likes a two piece hybrid instead of a single piece aluminum. Our Score: 9/10.

After a couple of games, several hours in the cage, reading direct user reviews, discussing the bat with the manufacturer and major vendors we put together the following review on the 2018 DeMarini Voodoo Insane. Although the bat does come with a larger barrel then the Balanced Voodoo or One, the added end weight is a real hindrance to smaller hitters. If, then, you are stronger hitter looking for a hybrid bat then we are confident you'll be happy with the 2018 Demarini Voodoo Insane.

In terms of barrel performance, there isn’t much difference between BBCOR standard bats. The real trick is finding a bat with the right swing weight—one that you can optimize total force at impact.

The 2021 Victus Nox is a hybrid BBCOR Bat. It complements the Victus Vandal—which is a single-piece aluminum bat built with a light swing. Of all the data we gathered on the NOX, we found the swing weight lighter than we expected. For the 33-inch we were sent, the swing weight was 9150, which is about 50 points under the average 33-inch BBCOR. Bats like The Goods swing in the 9300 to 9400 range. The Nox should be considered an average or balanced swinging hybrid 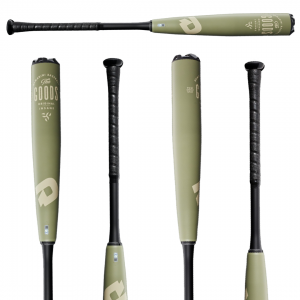 Expect a standard slate of 32 through 34 inches BBCOR The Goods bats for 2021. And, of some note, expect a 34.5″ version too. There are some 35-inch BBCOR bats out there. But, this is unique for a high profile bat to come in something bigger than a 34-inch.