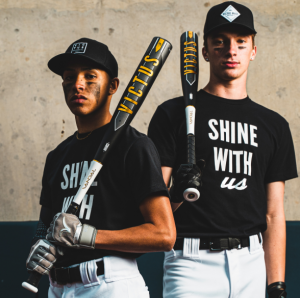 While the light swing doesn’t help any when it comes to hand sting it does allow a hitter to size up an inch for more plate coverage with the same swing weight they might get out of a balanced or heavier winging shorter bat.


Our 2020 Victus Vandal review comes after hitting with the bat more than 200 times with 3 different hitters. In short, the 2020 Vandal’s inner barrel design and exit speeds make it a legit single piece aluminum bat with a premium price, great look and reasonable enough performance to serve the serious hitter. The barrel size is good but not functionally bigger than other comparable bats like the Solo. We think the 2020 Victus Vandal price is more than its performance and design deserves but, not more than it’s vibe and unique Victus brand should get.

Single piece aluminum bats with performance level barrels and extended composite end caps attract both the big hitter who wants another inch in his BBCOR bat and the smaller more base hitting type that’s looking for more exit speed. Although its still quite early in its lifespan, and we like to see more general hitting reviews aside from our own experience come back, we think the Vandal will compete well with bats like the Rawlings Velo, Slugger Solo and Easton Fuze. Each of those are extended composite end cap bats that attempt to make a light swing and a big barrel.

That said, it becomes more and more difficult to differentiate between the performance of BBCOR bats in the aluminum space as several companies can get real close to the limit. We think Victus will be successful with the Vandal as their presence in the MLB space is remarkable (#2 last time we checked). But, in terms of it blowing us and the market away with its new found performance we aren’t holding our breath.

Of course, too, there is Marucci’s CAT line of bats. Marucci uses a very similar wall thinning technique as the Vandal (surely they worked together on this since Marucci owns Victus) but the CAT 8 line of bats (or any previous) do not have an extended composite end cap. If you want to go Old School, there is an older Boombah Cannon floating around that uses an extended composite end cap and an aluminum barrel with different thicknesses—almost exactly like the Vandal.

The 2020 Victus Vandal is, at its core, a single piece aluminum bat. It is a metal handle and barrel made out of the same material. Inside that barrel the walls have different levels of thickness. In theory at least, this extends the length of the sweet spot as making the areas outside of the middle just as springy as the middle of the barrel. To help lower the swing weight, the Victus Vandal extends the length of the end cap, which is made of composite (aka plastic). This strategy, used by other bats on the market too, remove metal end cap weight and replace it with light composite. As such, you get a light swinging single piece aluminum bat with an extended composite end cap.