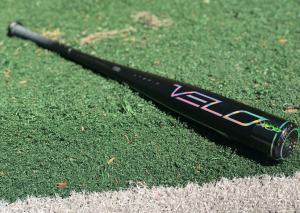 As has been the case for the last several years, our hitters like the light swing and loud ping of the 2020 Rawlings VELO ACP. The new end cap has driven down the swing weight a bit from previous years (2 to 3%) and it feels great if you can barrel it up. Of course, like always, single piece bats will ring your hands if you miss it. But, the stiff nature of the bat, loud sound and reasonably sized barrel can drill some balls if you square it up.


2020 Rawlings VELO ACP Review: as iconic as any bat in the non-wood bat space, the 2020 Velo is a light swing, loud sound and newly designed end cap. Our favorite version, after hitting every one, is the uniuqe drop 5 USSSA Velo which swings lighter than many drop 8 bats. It’s a great choice for the little guy forced to use big bats. The BBCOR version will do well with a newly designed end cap (which made no difference in our exit speeds). The USA version in a drop 11 still struggled to impress.

The idea 2020 Velo ACP hitter, in our mind, is two types of players. First is the newer and younger player looking for as much bat speed as possible whose parents would rather not get a second mortgage to buy a bat. The Velo feels great and can hit the ball as far as any other performance bat on the market at a fraction of the cost. The other type of hitter who will like the Velo is a relatively big hitting high school player that likes a stiff feel and really wants to maximize his reach at the plate with a 33 or 34-inch BBCOR. Those aren’t the only two types of players who will like the Velo ACP for 2020, but those are the exact type of hitters that gravitate towards it.

Although the Velo is the first line to use variable wall thickness, at least as far as we’ve been tracking, there are many other bats that use similar tech now. Marucci’s CAT line of bats use a similar process and, likely most popularly, Louisville Slugger’s Solo series does it too. Over the years there have been a few which have come on gone like a few of Rip-Its bats as well as Boombahs series of BBCOR bats. We argue the most similar bat to the Velo is the Solo. But, the 2020 Velo ACP is priced more like the CAT than the Solo. Rawlings did add a new polymer to the handle to help dampen sting on mishits, a feature the Solo does not have, so the jury is still out if that’s worth the extra few bucks.

The big change from the 2019 Velo and the 2020 Velo ACP is the end cap which lowers the swing weight, by our calculations, 2 – 3%. This change makes it the lightest swinging BBCOR bat on the market for 2020 and now lower than the Quatro Pro.

The ACP (Accelerated Carbon Performance) shows two full inches of carbon extended into the barrel. Previous versions of the bat had a similar composite end cap, but the ACP takes it up a notch. Although we don’t have all the numbers for every drop and length the theme we noticed for USSSA as well as USA also make the 2020 version a bit lighter swinging than the 2019.

As well, the 2020 Velo has a new barrel profile (made possible by the end cap) as well as a vibration dampening material infused on the inside of the barrel. These changes make a considerably different bat than the 2019 Velo—which really had not changed much since the 2016 version.

The 2020 Rawlings VELO ACP is a single piece bat with an extended composite end cap. Meaning, and you can see this quite clear on the barrel, the last two inches are made of a different material. That material is a light plastic type material which helps bring down the swing weight of the bat. This allows for more construction girth to sit in the handle and barrel which helps extend its sweet spot.

In addition to the end cap, its most unique feature, the Velo uses a strong and proven alloy in the barrel (they call this the Ai909). On the inside of the bat, this Alloy has different levels of thickness to help it stay within the league standard but also extend its performance away from its middle. This is a proven tech which at least a couple aluminum bats use in the baseball space.

New to the 2020 Velo is the use of a “urethane infused” within the handle to help sting. It’s possible this works, but we can’t find any reliable way to measure it other than hearing from the thousands of readers and direct feedback we will get over the year.