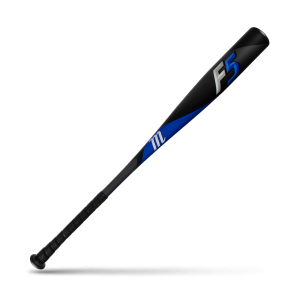 We spent time with Marucci’s 2020 F5 in a number of games this season. We’ve also hit with it in the cage, during BP, cold weather and among several different players. In short, the bat works well for the value buyer looking for a lighter swing on an aluminum bat who doesn’t want to break the bank.


Our hitters like the big barrel on the F5. It also sounds great. The bat is considered balanced by our swing weight measurements. (Meaning its not quite heavy and its not ultra heavy—somewhere in the middle). Still, the bat is made for the aluminum barrel hitter looking for a big barrel and a light swing who doesn’t want to break the bank.

The 2020 Marucci F5 is made for the hitter that likes a stiff feel on a traditional big aluminum barrel. The price is more for entry level players who pass on the price of the Marucci CAT 8 and its anti vibration knob. The barrels are identical between the two but the prices and knob are not. We think the BBCOR and USSSA versions of the bat are just fine–the price will make the attractive to some. But, we really like the JBB version of the bat for that 6, 7 and 8 year old getting in his or her first season of pitch.

There are a few lighter swinging single piece aluminum bats in the BBCOR performance space. Most notably, and easily the most popular, is Slugger’s Omaha series. It’s a remarkably similar bat that comes in very similar sizing and swing weights. Rawlings makes a entry level bat called the 5150 which is also a single piece aluminum. The 5150 feels a bit outdated as we write this as Rawilngs might have left that bat behind for 2020.

Also, the Marucci CAT 8 is a reasonably similar bat. The only major difference, and yes you can tell when hitting, is the F5 has no anti-vibration knob in the handle. This rubber type piece that sits inside the knob is a harmonic sting dampener and helps remove the vibration of a mishit ball. But, in terms of the barrel profile and make up the bats are similar.

The 2018 version of the F5 is basically identical with the 2020 version except for the black color. The black is, in part, for the new collegiate NCAA requirement in 2020 for no white bats. The F5 and CAT lines were updated in 2020 to be black.

If you can find the right size in the 2018 F5 (the white and blue one) then we would go for it unless, of course, you’re in love with the 2020 black and blue version.

The most unique feature of the 2020 Marucci F5 is the barrels multi variable wall thickness. If you were to cut the F5 open you’d find its barrel to be different levels of thickness. As it goes away from the center of the barrel it gets thinner. This strategy, used in a few company’s bats, help extend the length of the sweet spot and usable parts of the barrel while keeping the dead center under the limit.