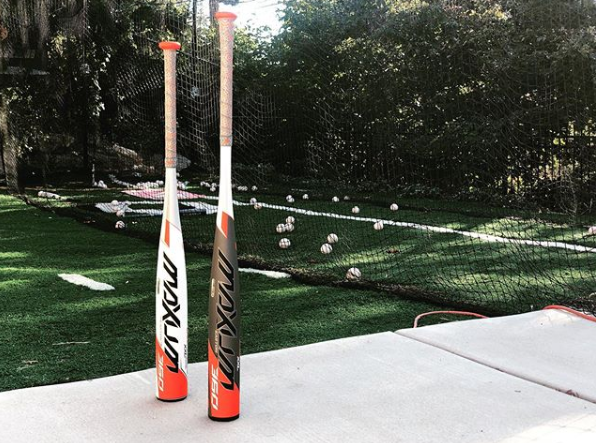 2020 Easton Maxum Review: Surprising. Impressive. Easily the biggest surprise of all 2020 Baseball bats is Easton’s new Maxum. It replicates the old Combat Maxum well with a huge barrel. The ultra light swing in BBCOR and its outstanding exit speed make it one the best BBCOR bats for 2020. The USSSA versions of the bat are no joke either and should put Dirty South Bats on its heels a bit. Huge barrels and light swings go a long way in the youth space and the Maxum is a great pace changer from the overdone two piece composites in the market. Our Score: 9.8/10

Like year’s past, the Easton Maxum is loved for its massive barrel. It is, in some respects, the model that Dirty South Bats built their successful yet young company from. That is our sentiment, not necessarily theirs. It is a single piece bat so you can expect some ring in the hands on mis… Jump to the full review.

Like year’s past, the Easton Maxum is loved for its massive barrel. It is, in some respects, the model that Dirty South Bats built their successful yet young company from. That is our sentiment, not necessarily theirs. It is a single piece bat so you can expect some ring in the hands on mishits. As well, the barrel swings ultra light and, if you’ve never held a Maxum in hand, will be surprised at the size of the barrel. It is ridiculous.

Have you checked this bat out? I believe it’s only offered at Justbats.com. It seems to be very well-liked. I would like to hear how it compares to the Maxxum 360 BBCOR.

Yes. We have seen it and hit it. The story is long. But, in short, JustBats bought the rights to the Combat bat name when they went out of business a few years back. They remade the Combat Maxum from year’s past and changed the color and image to a new B2 design after an older Combat design.

The bat colorway is new, but the bat is not. It is the Combat Maxum from year’s past remade by JustBats and sold exclusively on their website.

Easton is owned by the same parent company that went bankrupt and, as a result, closed down the Combat Bat operations. (They kept Easton alive). Much of the intellectual property and assets went to Easton. This year (2020), Easton resurrected the Combat Maxum name in a bat of their own called the Easton Maxum. It is designed after the Combat Maxum of old with a few Easton influences.

All three bats, the Easton Maxum, Combat Maxum, and Just Bats Combat B2, are the same idea: A Big barrel on a single piece composite bat. Each has a lighter swing weight. By our measurements, the Just Bats Combat B2 had the lightest swing weight, but that will depend on the model, length, and league you are looking at specifically.

In any event, we hope that helps. The bat industry is full of reprints and acquisitions. It makes it a jungle out there.

He’s a little bit taller than those in his age group but is skinnier than most. We were considering investing in a drop 12 bat for him and was wondering if which of the USSSA drop 12 would be best?

Thanks for the question. The Drop 12 USSSA Bat space is a tough one. Very few bats in that realm feel like they hit the ball very well—they are all barrel, no power. And, usually, any amount of pitch speed will ring the hands. It surprises us that there are not many two-piece USSSA bats available—as that seems likes the group that would benefit from it the most. But, we guess, keeping a bat under that weight restriction and adding a connective piece isn’t in the cards.

Also, we once wrote an article, in 2018, on the best drop 12 bats. It needs to be updated badly, but you might be able to gleam something from that too.

Although we never resist the urge to make a list of rankings, the truth is all those bats will likely serve your purpose just fine. There’s also an Easton Hyperlite in a drop 12, which is just fine—like the rest. There’s only very little differentiation between drop 12 bats—all are mostly okay.

If it were our money, we’d buy an older Combat in a drop 12 on eBay like this one here. That bat will perform just as well as the Maxum or B2 and let you put some extra money towards a sweet Nokona glove or bat bag.

We hope that is helpful or at least gets you on the right track.

Thanks for reaching out,

Back from the dead, Easton raised one of our few BBCOR Diamond winners for 2020. It's worst score is in its demand, which we don't weight too heavily---not many BBCOR players are looking for single piece composites with that price point. The Easton Maxum in BBCOR barely makes the top 20 in popularity. But what it lacks in demands it destroys in the categories we weight the most: hitter feedback and performance. In both its either first or tied for first. Tech specs also rank out as well as its new design from Easton gives it the biggest barrel on the market. As well, the light swing in a number of lengths make it a viable option for 90% of 2020 BBCOR players.

Recommendations for the 2020 Easton Maxum stand close to where the Maxum was recommended in 2018 and previously. That is, it is made specificlly for hitters that want a balanced swing and the largest barrel space per swing weight on the market. It will ring the hands more than most two piece bats so, if that bothers you and you don’t quite barrel the bat up every time, you might want to look elsewhere. Although too early to tell on durability, the Maxums of old had surprisingly good durability for as huge and thin as they are made for performance. We will keep tracking.

We’ve yet to see a single piece composite bat do very well in the BBCOR space. Seems like most hitters who want a stiff bat, like the Maxum is considered, are more interested in end loads. As such, big hitting single piece aluminum bats like the 5150 or Omaha do really well. However, there is that contingent of smaller players who are more of the base hit type that want a light swing and the added power of a single piece. The Maxum is the exact type of bat for that kind of player. For the record, the Combat versions of the Maxum in BBCOR got lukewarm reviews from most players. We don’t expect the 2020 Easton Maxum in BBCOR to be a must swing kind of bat, but it will work for some.

USSSA is where the Easton Maxum should make a real run. The 2020 version of the Maxum comes in a drop 5, 10 and 12. The 10 and 12 are 2 3/4 bats while the drop 5 is a 2 3/4. In some circles, the drop 5 Maxum was the favorite USSSA bat in 2017. Even beating out the CF Zen. People loved the heavy swing weight to compensate for stingy hands and the absolutely monster barrel. We’ve never seen any kid hit a ball further in USSSA than with a drop 5 Combat of days gone by and, believe us, we’ve seen a lot of that CF Zen from 2017. The drop 12 version of the bat doesn’t have enough gumption in its barrel to compensate for the ring on the hands, but it might fit for some–especially those seeing slower pitch speeds.

There was no 2019 Combat. A major vendor bought all of the inventory when Combat when defunct and kept selling them new during the Maxum drought—even honoring the warranty if something went wrong. This is the first year Easton releases a Maxum. In large measure the bat looks super similar. Combat loved the idea of a seamless composite structure, the bat’s weight is committed to a balanced swing and it still comes with a Lizard Skin—just like the Maxum of old.

In terms of its actual performance compared to a 2016, 2017 or 2018 version of the Combat Maxum only time will tell. Although it will be hard to pass up if you are an Easton fan, our expectation is that the Easton Maxum and Combat Maxum of days gone by are remarkably similar.

Cage work and a few games with the BBCOR 2018 Combat MAXUM, as well as a couple conversations with major vendors on the bat, put us in a spot to publish a review.

We have spent over a hundred hours of cage and game time experience among several different players to formulate our 2017 Combat MAXUM Review.

Combat, a Canadian based company, is known in the baseball space for a high-performance one-piece composite baseball bat with a lot of barrel.

In USSSA you have a few options. We’d argue the most similar bats are Sluggers’ 2020 Prime One, Dirty Souths Line of USSSA bats, the Rawlings Threat and Marucci’s CAT composite. In terms of sizing options the Easton Maxum has them all beat. If a drop 10 is where you’re looking then you’ll have several options.

After discussing with several players that have used the BBCOR Dirty South KAMO and measuring its exit speeds and swing weights, we write this review.

We put several hundred swings on the 2018 Rawlings Threat USA Bat. The USSSA and BBCOR versions are reviewed here too, but they are significantly different in makeup when compared to the 2019 USA Rawlings Threat.

New for 2019, Marucci releases a full composite two piece bat. In some sense, this bat replaces the Marucci Hex Composite but uses the two piece connection you could find a CAT 8 connect called the SDX.

The 2020 Easton Maxum is a bat made from a single piece of composite. They use a seamless piece of plastic that allows to have an absolutley massive barrel. Easton claism to have added some of their 360 tech to the bat, but that might be some marketing speak to help fit it into the 2020 line of “360” bats. The composite is ultra light and you’ll notice that right when you pick it up. Every size of Easton Maxum, from the drop 12 to the drop 3, are built for a light swing weight. Expect a custom Lizard Skin on each one too. 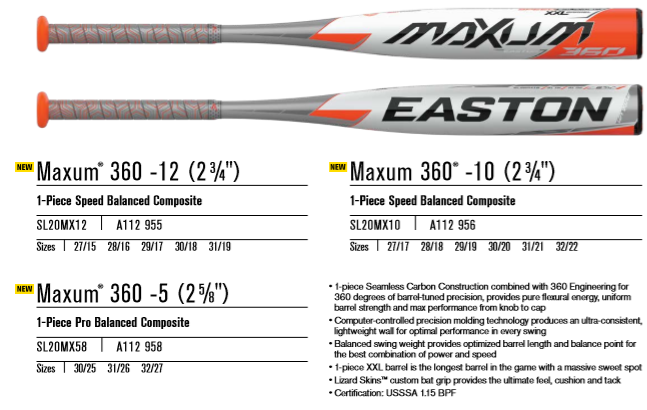