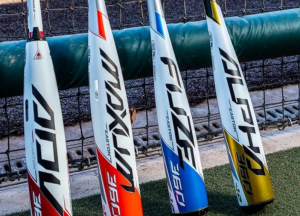 Our 2020 Easton ADV 360 review is glowing. In BBCOR, behind the Meta, it rates out one of our favorite two-piece composite bat for 2020. The fact it’s $50 cheaper makes it very attractive. For USA, the drop 11 is legit. Winning our favorite USA Bat. It swings as heavy as some drop 10 bats, so don’t oversize it. The drop 10 isn’t terrible, but we prefer the Ultra Light Launch Comp in the 11. The ADV 360 in USSSA is robust with a perfect swing, big barrels, and the Power Boost knob. All in all, the 2020 Easton ADV 360 line may be the best overall bat line for 2020.


Our hitters like the ADV 360 for several reasons depending on the model. Overall, they like that it is the premier bat for Easton and those who are fond of the brand are also fond of the bat. Younger hitters and those who don’t have above average power prefered it more. The same type of hitters who liked DeMarini’s CF, Slugger’s Meta or Rawlings Quatro Pro were the same hitters who gravitated towards the 2020 ADV 360 from Easton.

Hitters who are not that concerned with budget and want the best tech Easton has invented will like the ADV 360 in any model type. It is built for the hitter who wants bat speed, barrel size and a super smooth feel on both hits and mishits. Performance wise expect a top shelf bat that performs at or near the limit under any number of circustnaces. The sweet spot is generally large.

Note, too, the ADV 360 USA in a drop 11 (The red USA bat that looks like the BBCOR one) is the ONLY bat of the bunch that uses a different type of composite. This is why it drives a premium over the other ADV 360 USA bats. More on that below.

There are several high end bats that come in a two piece composite. While each of those have their own zing, Easton’s ADV 360 is the only with the soft knob (which they call the Power Boost). They also use a unique end cap although that might not be something you can tell on the swing. If you’re looking for something similar or something to compare it too look at DeMarini’s CF, the 2020 Rawlings Quatro Pro and Sluggers’ Prime.

Compared to the 2019 Easton ADV in BBCOR the bat has very few changes. They did upgrade some things in the handle and make the connection piece a bit lighter. But, on the whole, the BBCOR versions of the bat should be close to similar (with hopefully some more durability). It did get good ratings last year and we expect the same this coming year. The USA and USSSA versions did not exist in 2019. The Easton Ghost Evolution compared to the ADV 360 is virtually a different bat. New barrel, connection piece, soft knob and end cap. Granted, they are still two piece composite bats with smooth feels. But, in terms of a piece by piece comparison expect a different bat altogether.

Easton’s 2020 ADV 360 uses a two piece connection with a big barrel and a soft knob to help dampen sting. The two piece connection allows for hits and mishits to not hurt the hands as bad. The big barrel extends the sweet spot of the bat. A balanced swing makes allows smaller or growing players more chances to barrel up the ball. In some sense, the Easton ADV 360 is the evolution of Easton’s long line of two piece composite bats starting with the Mako almost a dozen years ago. Several serious players at all levels of the sport are committed to making Easton’s flagship bat theirs.