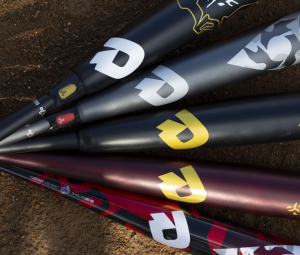 Our hitters love the feel of the 2020 DeMarini Voodoo. Younger hitters, especially those in the USSSA space, have an expectation of better off the bat feel than the Voodoo offers. But, BBCOR and USA players think its a great performing and feeling bat, worthy of most serious baseball players looking for balance a great connective piece.

There are now several versions of the Voodoo in 2020 and keeping track of them is not easy. In short, the Voodoo is a balanced bat that comes in a BBCOR, USA and USSSA. There is also a Voodoo One that is a single piece version (without the connected handle) of the Voodoo. As well, there is a “The Goods” bat that is new for 2020 that replaces the Voodoo Insane in BBCOR of previous years.


2020 DeMarini Voodoo Review: Best Hybrid. Proven. The DeMarini Voodoo has long been one of our favorite bats. Last year it was our favorite USA Bat. We contend there, as we will here, that a hot out of the wrapper USA performing bat with a CF like connective feel is a perfect fit for the USA player. In BBCOR the Voodoo is our favorite hybrid bat with a top end exit speeds regardless of price or design. The only lackluster Voodoo is in USSSA which is overshadowed by its more expensive CF kin. Our Score: 9.9/10 (BBCOR); 9.9/10 (USA); 8.0 (USSSA).

The 2020 DeMarini Voodoo is a balanced swinging bat with a more reasonable price point and a top end two piece connection. As such, we think it works well for the hitter who likes needs bat speed and a smooth contact feel but also does not want the hand ring associated with stiffer aluminum barrels. Do NOT think of the Voodoo as a poor man’s CF. It is a hot out of the wrapper bat that many college players prefer due to its aluminum barrel. Granted, many of those hitters like the stiffer feel found in an Insane or The Goods version of the bat. But the idea is roughly he same for younger guys that like hot out of the wrapper aluminum bats.

Although the end cap is changed from 2019 to 2020, we don’t think that enough to pay much of a premium for the newer one. Unless you are fully committed to the color scheme of the 2020 Voodoo, we suggest you prefer a discounted 2019 version over this years as long as supplies in your size last.

If you want a balanced HYBRID bat in the BBCOR, USA or USSSA space their really are NOT a lot of options. Slugger’s hybrid (the Select line of bats) are end loaded. Rawlings does not have a traditional hybrid bat for 2020. Marucci’s CAT 8 Connect is also end loaded.

Easton, for 2020, has a 2-piece hybrid bat called the Fuze Hybrid. It is, at least for 2020, the most comparable bat to the 2020 DeMarini Voodoo. But, unlike the Voodoo, the Fuze will only come in a BBCOR for 2020 while the Voodoo has a USSSA, USA and BBCOR.

Compared to the 2019 DeMarini Voodoo Balanced the only change is a new “ReACTOIN END CAP”. This new end cap helps with barrel durability without sacrificing swing speed. The Reaction End cap is the upgrade in each of the BBCOR, USA and USSSA line as well as the 2020 CF models.

Otherwise, expect the same bat with X14 alloy in the barrel, a two piece hybrid with the 3-fusion technology that DeMarini uses in all their high end bats.

The real changes between the 2019 and 2020 DeMarini Voodoo lines is actually what is NOT there: the Voodoo Insane. Instead, DeMarini adds a “The Goods” bat in that place that has a stiff connection and heavy swing weight.

The 2020 DeMarini Voodoo in BBCOR, USA and USSSA is a two piece hybrid bat. This means the barrel is aluminum while the handle is composite. This setup delivers a hot out of the wrapper bat (no work in needed) and the comfort of a nice two piece feel on hits and mishits. The bat’s durability increases over its more expensive CF brother, but still packs a good punch and feels fantastic.

For 2020 they added a new end cap called the Reaction End Cap. Redesigning the end cap to hone in the swing weight and perfect the durability is a common approach that most bat companies follow for a bat.