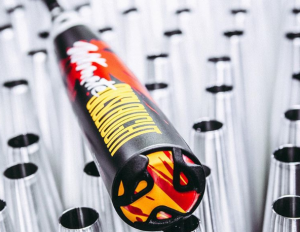 In BBCOR, our hitters are most impressed with the balance and barrel size of the CF 2020 DeMarini Ultimate Onslaught. The feel is as good as other BBCOR two-piece composites (save the Meta, according to our testers). It ranks out well enough to be considered for any hitter that wants the light to balanced swing and likes the smooth smash of a two-piece composite.


For the 30th anniversary, DeMarini releases a 2020 version of the CF called the 2020 DeMarini CF Onslaught. The bat is a replica of the 2020 Version of the BBCOR CF. That is, it’s a two-piece composite bat with a D-Fusion handle, a big barrel that only comes in a 32 and 33-inch. It’s a review, unless we were caught up in the aesthetics, is as glowing as the CF (its the same bat). It feels great and has a perfect blend of balance and barrel size. Although DeMarini’s CF in BBCOR is not as dominant as the USSSA version, it’s a worthy option for any player looking for a smooth smash on a big barreled balanced bat in the BBCOR space.

We recommend the BBCOR 2020 DeMarini Ultimate Onslaught to any hitter that likes the CF, doesn’t have a budget, and wants the best BBCOR bat DeMarini makes. (Although some would argue The Goods, that’s a different hitter type).

If you are looking for different bats than the Ultimate Onslaught/CF then check out bats like the Meta, Quatro Pro, ADV 360 and Prime.

There was no previous year version of the Onslaught in BBCOR. There was a 2019 version of the CF Zen (which this bat was built after). If you really want to see the genealogy of this bat then check out that bat and its predecessors.

Like the 2020 CF, the DeMarini Onslaught is a two-piece composite bat that uses the Paraflex composite in the barrel and the 3-Fusion handle connective piece. The swing weight is on the lighter side of average BBCOR bat swing weights and the barrel size is on the bigger size compared to other BBCOR bats.