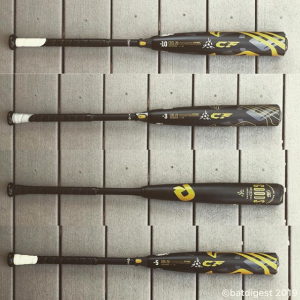 The 2020 DeMarini CF review comes on the heels of hours of testing the BBCOR, USSSA and USA versions. Our testing gave the 2020 USSSA CF a near perfect rating (save the potential for durability issues). The USA version rated out well but, like all composite barrels in USA  bats, lacked great performance. BBCOR CF testing didn’t go so well and it’s the biggest disappointment of the bunch. We’re not sure what to think of that. We liked the 2019 version. Still, our BBCOR 2020 CF hitters and exit speeds were uninspired. Our Score 9.9/10 (USSSA); 9.0/10 (USA); 8/10 (BBCOR).


Some of our hitters like everything about the 2020 DeMarini CF. They like the swing weight, the feel on contact, the bats big barrel and performance on balls you square and and even miss. We like the sizing options–as it comes in drop 10, 8 and 5s in the USSSA; a drop 10 in the USA and BBCOR.

The only thing that people complain about with the CF, especially for the USSSA version, is the bat’s durability. Most don’t argue with the fact the bat performs, in the USSSA space at least, better than all the others. But, the durability, or lack thereof, does drive at least some crazy.

If you are in the USSSA space then we have a hard time suggesting you buy any other bat but the CF. Granted, it might break. No doubt, you’ll find a user review online that hates the bat and the company stemming from a CF breaking. But, we feel confident the lack of durability is directly correlated with how hot the bat performs.

Amazon eBay JustBats
The 2020 DeMarini CF defines the space as to what a USSSA drop 10 should feel, sound and perform like. While bats like the CAT 9 get a lot of play too, the CF still dominates the space. Although the bat is not as durable as many would hope, most are fine with a bat that performs as well as this does, feels as good as it does and has the barrel profile the CF does. All our hitters love the bat and, without fail, put it in their top 2 of 2020 USSSA bats.
Sizing: 28, 29, 30, 31, 32-inch
Release Date: August 1, 2019
Serial: WTDXCBZ20
Bat Type: Two Piece Composite
Barrel Size: 2 3/4
See other Drop 10 USSSA Bats

In the Senior League arena few make the case the CF series from DeMarini has an equal. It dominates the USSSA big barrel bat space, and we see no reason that will change 2020. Of course, though, the jury is still out.

In terms of two piece composite USA bats you have a few options. Slugger’s 919 Prime, Easton’s Ghost Evolution and Rawling’s Quatro are the most common similar bats.

In BBCOR the world is your oyster. It feels like everyone makes a two piece composite that swings light and has a big barrel. The field is mixed. Rawling’s Quatro and Slugger’s Meta Prime as well a Easton’s ADV all compete for the top end performing BBCOR bat.

It’s too early to tell if DeMarini addressed the only serious complaint folks have with DeMarini’s Senior League bat. That is, of course, its durability. But, our sentiment is that DeMarini has proven willing to keep pushing the performance limit at the expense of bats that aren’t as durable. To date, based on sheer market dominance, the strategy has worked.

For 2020 they did update the end cap to one they are calling the “ReACTION END CAP”. If that solved the problem we must wait and see. But we aren’t holding our breath.

DeMarini uses a two piece composite bat structure for the 2020 CF. The two pieces are made from composite materials. The composite is the same as it was in 2019 CF Zen and is referred to as Paraflex Plus Composite Barrel.

The connection piece, where the bat’s barrel and handle are fused together, intends to remove sting from the hands and keep energy in the barrel. There is more tech in the connection piece than we’ll give time for it here. But, for what it is worth, DeMarini has long been the leader in top end connective pieces in their two piece bats. DeMarini refers to the connective piece on their 2020 CF as the 3 Fusion Connection.

New to the 2020 line is a redesigned end cap. DeMarini’s CF calls this the ReACTION End Cap and, atleast they claim, is built with stronger and lighter materials to “increase barrel performance without sacrificing swing speed.” Of course what we think is the new end cap doesn’t change the swing weight of the bat but may very well improve its durability. We will see…