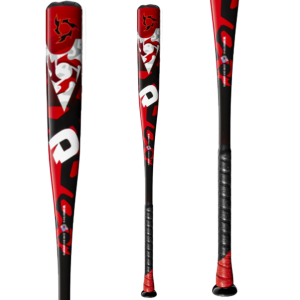 Cage and game hitting and exit speeds and direct player feedback compromise this 2020 DeMarini Voodoo Review. The bat is considered a light swinging, entry-level performance baseball bat in the single-piece aluminum space. The Voodoo One, not to be confused with the hybrid Voodoo Balanced, comes in BBCOR, USA, and USSSA. Players looking for a value deal or big and strong players that want a very light swing in a stiff bat will like the 2020 DeMarini Voodoo One. The USA bat is a real bright spot, the BBCOR version is average, and the USSSA bat is avoidable.

Generally, those who are very serious about youth competitive baseball won’t find the Voodoo very exciting. Its hand ringing nature and smaller barrel aren’t things people praise in the dugout. On the other end of the spectrum, serious college players prefer single-piece bats with an end load. The 2020 Voodoo One is a single-piece bat, but it swings light. Some players in the NCAA like its stiff feel and bat speed, as are there youth players and parents who like its sound, performance, and price to make it their bat of choice. The most recommendable bat of the bunch is the drop 5 USA version, which serves as a great cold-weather bat or BP stick for the growing youth competitive player.

Voodoo One Amazon eBay JustBats
The 2020 Voodoo One is a single-piece bat with a balanced swing and moderately sized barrel. The bat is hard to find, but don't be worried; it's the same bat as the 2019 and 2018 versions that are the same but the end cap. We think the bat is decent, but its exit speeds are no better than other BBCOR bats especially similar ones like the SOLO, Omaha, and Easton Alpha.
Sizing: 30, 31, 32, 33, 34, 34-inch
Release Date: August 1, 2019
Serial: wtdxvoc20
Bat Type: Single Piece Alloy
Barrel Size: 2 5/8
See other BBCOR Bats

Amazon eBay JustBats
The 2020 DeMarini Voood One in USA is a drop 10, 2 5/8 diameter barreled bat with a balanced swing and decent sized barrel. It didn't change much from the 2019 version other than a new end cap. But, we don't think the X14 alloy was adjusted enough from last year to make it perform better in terms of performance. It works well for the smaller player looking for lots of bat speed but doesn't see the pitch speed that will really ring the hands. It's a great value buy if you can find it for the right price.
Sizing: 28, 29, 30, 31, 32-inch
Release Date: August 1, 2019
Serial: WTDXU0220
Bat Type: Single Piece Alloy
Barrel Size: 2 5/8
See other Drop 10 USA Bats Bats

Amazon eBay JustBats
The 2020 DeMarini Voodoo One in a drop 10 USSSA is a single-piece aluminum bat with a good-sized 2 3/4 barrel. It swings light and competes with bats like the VELO and Omaha from Slugger as well as a the single piece Easton Fuze. The bat gets decent ratings,
Sizing: 29, 30, 31, 32-inch
Release Date: August 1, 2019
Serial: WTDXVOZ20
Bat Type: Single Piece Alloy
Barrel Size: 2 3/4
See other Drop 10 USSSA Bats

There are several single-piece aluminum bats on the market—not many have an MSRP of $249 for BBCOR. Some, like the CAT 8 and Velo, price out well over that and, we think, rightfully so. Those bats have done a remarkable job in the single-piece space with a big barrel and strong swing. The most similar bat in pricing and makeup to the 2020 Voodoo One is the 2020 Slugger Omaha. However, when comparing user reviews, Omaha, to put it mildly, wipes the floor in BBCOR, USA, and USSSA.

Compared to the 2019 Voodoo One, the only change is the end cap’s change to a “ReACTION END CAP.” In effect, the end cap is supposed to hone in the swing weight and help with some barrel performance. Our expectation is it won’t change the on-field or general sentiment when compared to the 2019. In other words, we would not buy a 2020 Voodoo One until you can no longer find the 2019 versions at a discount.

The barrel of the Voodoo One is the same material that makes up the very popular 2020 Voodoo. That bat is a two-piece hybrid with a terribly similar name. Remember, the ONE means it’s a one-piece. The other piece on the 2020 Voodoo One is the end cap which, as we stated above, is upgraded from the 2019 version to be a bit more durable and lighter.