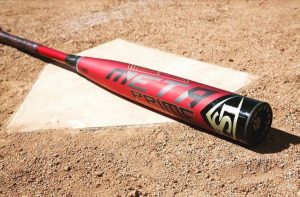 The 2019 Louisville Slugger Meta is the best a BBCOR bat has ever been. The barrel is massive, the sound is perfect, the feel is amazing. Every hit feels like a tank and every swing feels perfect. The only problem is the bat is nothing short of wildly expensive. This bat is THE SAME as the 2020 Meta (the blue one). However, the 33-inch version of this bat is not illegal. Hence it gets the perfect 10 from us.


In short, and the first thing most will notice, is the bat is expensive. It is the priciest bat in the BBCOR market for 2019. That said, the bat swings like a dream. Most hitters with the Meta Prime found it the best feeling among the group they tested. The balance is right where most players want it. Exit speeds were in the top echelon of bats and swing weight measured as a light swinging bat with a good sized barrel. If you’ve thrown budget out the window, then the Meta 9 Prime from Slugger is a brilliant choice.

At this point, it is difficult to say how comparable other two piece composite bats on the market are compared to the Meta 9 Prime. Of course the two piece composite space is replete. Rawlings’ Quatro Pro, Easton’s new Project 3 ADV, DeMarini’s CF Zen and Insane as well as Slugger’s own 919 Prime all fight for the top end dollar.

In other words, we are very much in a holding pattern to find out which one, if any, of these 2019 BBCOR bats will drive the market. But, if any bat is set to rock the boat of the normal winners in this category, the Meta 9 looks primed for the run. Follow our 2019 BBCOR bat reviews to stay up to date.

There really isn’t a “last year’s model” of the 2019 Meta Prime. The 918 Prime is followed by the 919 Prime. The Meta is enough of a new bat to be considered the first of a generation.

That said, Slugger surely learned somethings from the 91X Series of bats that they put into the Meta Prime. Though the Meta is not the official child of the 915, 916, 917 and 918, we think it more like a close cousin whose dad is uber-wealthy.

The bat, virtually, has everything upgraded from the 918. So much so that they decided to make it an entirely new bat. Do note, too, the 918 does have a natural upgrade in the 919 Prime. But, the Meta is different enough to start a new line of bats.

To start, the barrel is different. It’s big, sounds great, and feels about perfect. It uses a new connective piece that we’ve yet to see in the industry and the handle is a newer composite. Throw in a new type of end cap and the bat is completely redesigned. Although the price point is $500 we see why Slugger thinks they can justify it—although most people won’t