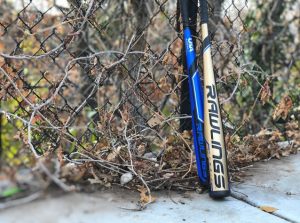 In short, hitters liked the light swing, loud sound, and trusted name of the 2019 Velo. A few did not like the hand sting and smaller barrel size. We’d recommend the bat to those who want a traditional feeling stiff bat with a light swing and a loud sound. Exit speeds looked good, but the bat lacked the swing weight to be considered a fireball. But it swings well, and a good hitter can make this work fine.


After recording several hitter’s experiences with the 2019 Rawlings Velo, we write this review. In short, hitters liked the light swing, loud sound, and trusted name of the 2019 Velo. The bat is a light swinging, sounds loud, and can hit it well if you can dial it in. Many players don’t like what they think is the smaller sweet spot and the hand wrings on mishits.

On the whole, we recommend the bat for those looking for a single-piece aluminum bat with a light swing. The BBCOR versions and the lower drops (like 5) felt between decent and good even on mishit balls. The lighter swinging bats (like the drop 10 USA) definitely delivered some hand sting on mishit balls–especially if the swing speed and pitch speed were fast.

The single-piece aluminum bat space is replete with options. We like bats like Easton’s Beast series as well as DeMarini’s one. Don’t forget either about Slugger’s 619 Solo or their 518 Omaha.

In terms of a real comparable bat (by way of construction), the 619 Solo is the most alike. It has a single-piece aluminum structure with an extended composite end cap and, like the 2019 Velo, comes in several sizing and league options.

Some would argue the Velo is a lot like the Marucci CAT 8. They both use variable wall thickness, but it’s hard to say these bats are too similar in terms of feel and barrel size. Where, we think, the CAT 8 shines.

Except the stock grip, there are virtually no changes in the 2019 Velo when compared to the 2018 version. Many would say that is a good thing. They liked the light swing, durable nature, and loud ping of the trusty Rawlings. That said, you’d do well to look for the 2018 version of the bat.

Like years past, the 2019 Rawlings Velo uses an extended composite end cap on a single-piece aluminum bat that uses variable wall thickness to extend the barrel’s length. In English, they: