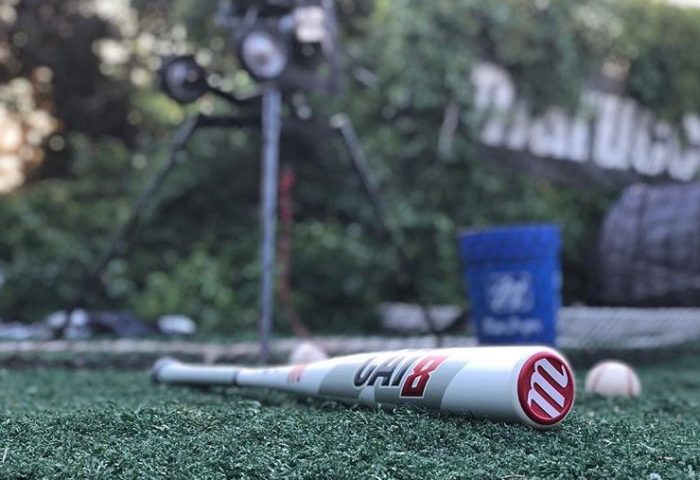 After a month of use with the BBCOR and USSSA versions of the CAT 8 we put together this 2019 CAT 8 Review.

The bat upgrades a few pieces to the CAT 7 (which we review here).

Noticeably, the difference in the barrel length as the CAT 8 uses 8 different thicknesses of barrel wall. This was made possible by a chang… Jump to the full review.

The bat upgrades a few pieces to the CAT 7 (which we review here).

Noticeably, the difference in the barrel length as the CAT 8 uses 8 different thicknesses of barrel wall. This was made possible by a change in the alloy. The CAT 8 still uses the patented AV2 knob which helps dampen sting. Our hitters, without surprise, loved the sound, power and feel of the 2019 Marucci CAT 8. More details follow.

You might also take a peak on the Money version of the CAT 8.

Could you help clear up the confusion? Someone else had asked you a question about the Bonesaber and you answered “we measured the BBCOR 33″ Bonesaber as a 9300 MOI. The average 33″ BBCOR bat swings at 9250. It is safe to say the Bonesaber in BBCOR is just slightly above average in swing weight. That’s considerably lighter than a bat like the CAT 9 but heavier than a bat-like DeMarini’s CF.” However, on your swing weight chart, the 2020 Bonesaber and the 2021 CAT 9 are almost the exact swing weight. I’m trying to decide between these two bats. Do they have similar swing weights?

Thanks for the clarifying question. The short answer is it appears we messed up in our answer. The Bonesaber is not considerably heavier than the CAT 9. So, it does swing similarly. We’ve edited that answer.

Here’s what we think happened, not that you’re looking for an excuse, is the CAT 8, and CAT 7 always swung on the heavy side. The CAT 9, however, does not. We were answering a question in our minds, thinking the CAT 9 was on the heavy side. In either case, the word considerable wasn’t accurate, but we think that is what happened. FWIW.

In any event, we’re glad to see people are reading what we’re answering and then having questions of their own!

Are Great 8U Bats Worth the Money?

Thanks for all you do.

Thanks for reaching out.

In short, we have yet to find bats that are that much difference between 8-year-olds. If he can ball, then a bat like the CF Glitch, 2020, 2019, etc. will be his best bet. However, although it will feel different to him than the CAT 7/8/9, we’d guess his actual exit speed won’t be any different.

It seems, roughly, not until players are in that 10 to 13-year-old range does the ‘best’ USSSA model matter. Before then, the pitch and swing speeds they see don’t generate enough collision force to engage the barrel. It’s all about making solid contact with the ball—and if they can, they’ll have success with just about any bat. We say focus on the right swing weight at that age over the right model.

That said, if you’ve got some money to spend and want your boy to have what most (including us) consider the best, the CF in a 28/18 is the right choice here.

Per the 2021, we can’t imagine the 2021 CF will be that much better than the Glitch or CF of 2020. If you can wait until the end of October to purchase, DeMarini is doing their bat day when they have a pretty substantial discount on bats—we’re hopeful the smaller size USSSA CFs will be in that mix.

If none of that sounds like what you wanted, then you’ll need to wait until November for the 2021 CF to come out. Once it does, we’ll be sure to review it here and have some videos up.

We surveyed over 2,000 players on their 2019 bat usage. We asked what bat they used, how they liked it and what bat they think is the best. We parsed that data into each individual bat and report those on our review pages. As well, we aggregated data on the bat brands overall ranking.

Owners of the CAT 8 BBCOR who believe they have the best bat:

Where do BBCOR Players Rank the CAT 8 among BBCOR bats?

What popularity rank is the CAT 8 BBCOR Bat?

Owners of the CAT 8 USSSA who believe they have the best bat:

Where do USSSA players rank the CAT 8 USSSA Bat?

How Popular is the CAT 8 USSSA Bat?

Look, you just can’t go wrong with the CAT 8 from Marucci. The bat rakes, always has. People love the feel and sound. The barrel is big for aluminum (and manageable even compared to composite barrels. The price point is much more palatable than some other bats out there.

If it has anything going against it (and this isn’t really anything) is that it’s swing weight is heavier than some popular BBCOR bats. Don’t consider the CAT 8 a end loaded bat, but by no means is it a ultra light or ‘balanced’ swing.

In terms of a single piece aluminum bat you just won’t find a bat with more prowess. The BBCOR Cat 8 feels perfect when you center it up and very manageable when you miss. The sting dampening ability found in the knob. Many consider the CAT 8 the best BBCOR bat on the market. The right hitter, those who want a stiff bat, a loud ping, and a slightly heavier than average swing in a BBCOR bat will never look back.

We generally recommend heavier swinging single piece aluminum bats. That sentiment stays true with Marucci’s CAT 8 where our hitters liked the drop 5 and drop 8 much more than the drop 10. If are in need of a single piece feel and can swing a drop 8 or drop 5 the CAT 8 USSSA should be on your short list.

The differences between the CAT 8 and CAT 7 are not monumental, but they are enough to warrant a conversation.

The biggest difference between the CAT 8 and the CAT 7 is the use of a different material in the CAT 8 that allows for another thickness in the barrel wall. The CAT 7, if you remember, has 7 different levels of thickness in the bats walls. This allows for a longer sweet spot and good weight distribution outside the center of the barrel. The CAT 8 upgrades its aluminum to provide for an 8th thickness. This expands the sweet spot even further.

It is impossible for us, or just about anyone, to measure the true differences between the CAT 8 and the CAT  7. Both bats, we are sure, are great. And our exit speed tests showed them perform quite similarly.

The 2018 Marucci CAT 7 is the same as the 2017 Marucci CAT 7. Marucci doesn't hide this idea. They release their performance bats on a two year cycle.

JustBats purchased the exclusive rights to the CAT 6. That is, the updated look on the CAT 6---with the red base and white accents---is a JustBats only bat. The expectation, as far as we understand it, is that such will be the case indefinitely. Making such an arrangement, as far as know, a first.

No other single piece aluminum bat has sting dampening abilities in the knob. But, if you wanted someting with a fancy knob, we’d check out the Axe Avenge. Although the Axe is constructed much differently it does have a similarly unique knob.

In the single piece aluminum space there are not any bats that run as expensive as the CAT 8. It is a man among boys in that department—and for some deservedly so. The Cat 8 is legit. But, if you are looking in the stiff single piece aluminum world check out a bat like Slugger’s 518 Omaha. As well, you might like the stiff feel of DeMarini’s Voodoo Insane for 2019–although that is officially a two piece bat (but ultra stiff).

2020 Marucci CAT USA Review: Marucci’s CAT USA is a single piece bat with a balanced swing, big barrel and tech in the knob to help dampen stings. It is one of our favorite USA bats that we awarded the platinum seal for 2020. Most hitters love it for the big barrel, great sound and hot ball flight if you can square one up. In the USA space we tend towards aluminum barrels (at least in the early years) and the CAT 8 fits the bill nicely. After watching the USA bat play out over the last 2 years, Marucci releases a much anticipated 2020 Marucci CAT.

Marucci, based in Baton Rogue, Louisiana, has been very tight lipped about the much anticipated bat. We have only heard, and second hand, that the “CAT 8” is to be released sometime in 2018. Our expectation would be the middle of the year (June to July).

Our general expectation is a new version of the Marucci CAT 7 with enough improvements to justify a new version.

Market economies would suggest a better version around the corner means its a great time to get a deal on a CAT 7. As vendors make room for inventory, and the major BBCOR push is over, price pressure is in our favor on the CAT 7.

Unlike most companies in the bat space, Marucci does NOT release a new make up of their marquee bats each year. Marucci’s privately held company allows it some liberty in this regard. We also think a 2 year release cycle makes plenty of sense.

Here are some reasons:

In terms of finding the CAT line of bats, the 2 year cycle removes a real need for adding a year to the bat’s name. But, virtually all other major bat brands use a year to distinguish their bat line.

However, do note, most groups will force it into a new category of 2019 bats. In fact, our review will likely be called the 2019 Marucci CAT 8 Review—not because it Marucci’ thinks of it as a 2019 bat (remember, it will likely be around in 2020 too). But, instead, because this is how people will search for it.

This is a single piece aluminum bat built with variable wall thickness. The CAT 7 was built similarly. And, turns out, that bat was fantastic. The CAT 8 comes in a BBCOR and big barrel option.

If you want this bat in a USA version, then you’ll need to look for at the USA 2020 Marucci CAT.

Have you not seen pics? Cat8 is the name!