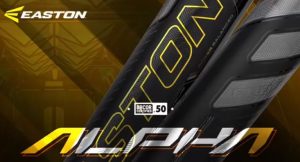 This is a single piece bat that upgrades the 2018 Beast X Speed/Loaded in noticeable ways. The barrel construction is longer, the handle is reinforced with a stiffer feel and they’ve added a custom Lizard Skin to the bat. They’ve also kept hold of the short 29-inch as well as sizes up through the 34-inch. Those in the market for a stiff feel on a reasonably priced performance BBCOR bat will like the 2019 Easton Alpha.


Easton starts their 2019 BBCOR bat offering with the new Alpha.

The single piece aluminum is replete with options. Bats like the Velo, 519 Omaha and DeMarini Voodoo One are prime examples. But, even Easton has a few other performance options like the Fuze.

The major difference, functionally, between the Beast X Speed and Easton Alpha is the stiffness in the handle. The project 3 team for Easton added some components underneath the hood of the single piece handle to make it more stiff. This is an improvement.

(The do reinforce the aluminum with some composite pieces. This is much different than the Beast X which was a true aluminum bat.

As well, you might notice, Easton is using Lizard Skin Grips. Previously, this honor was bestowed upon new Louisville Slugger grips. But, for 2019, Easton secured that exclusive contract.

We have yet to have enough access to the bats to determine the swing weight or exit speed of the Alpha in relation to the Beast X Speed. Our expectation is the bats swings like the 2018 Speed. If you want a heavier swinging bat then look for the Alpha Lock & Load.

The 2019 Easton Alpha is a single piece bat that uses a combination of aluminum and composite in the barrel. This design lends to a longer barrel. It is not a true hybrid design—as that term is reserved for those with an aluminum barrel and composite handle. But, the bat does swing light and has a long barrel. Compared to the Z-Core or Beast X from last you can expect a different sound and swing weight.