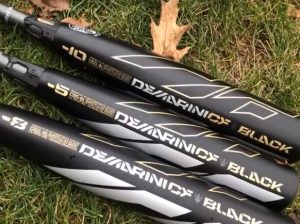 DeMarini’s CF Black is a limited edition USSSA version of the 2019 DeMarini CF Zen in baseball. That is, the bat is the exact same as the 2019 red/white version (which was pretty much the same bat as the 2018 version). We are big fans of the big barrel, great feel, and top-end performance of the Black CF. It’s a great bat and we’ve yet to hear of any player who did not like it.


The bat is exactly the same in its performance construction, but made in a unique CF Black colorway that has us drooling. We are huge fans of the CF line of bats. This addition, much like the Zero Dark line of CF bats before it, is sure to fetch a premium in the secondary market. Performance is exactly like the 2019 version of the CF Zen because it is, after all, the same exact bat.

The CF Black is the same bat as the CF Zen for 2019. As such, the USSSA recommendations stay that same. That is, a hitter looking for what many believe (including us) to be the best USSSA bat on the market. The Black version adds some flair and unique style but, in the end, is a ball killer just like the CF Zen. The fact the bat prices out the same, at least off the shelf, as the CF Zen makes it highly recommendable.

There are a few two piece composite bats with a light swing in the big barrel/USSSA market. To name a few, Rawlings’ Quatro, Slugger’s 919 prime and Easton’s Ghost X Evo. The only company to come out with a limited edition version of these bats throughout the year is Easton. In 2018 they had a color up version (white) of the drop 5 USSSA. That white version bat did very well for them.

A few years back DeMarini created some Zero Dark versions of the CF Zen. These were limited edition bats only to be found in brick and mortar stores. These CF Black’s are similar to that in the sense of a later release/color up that will reinvigorate the CF Zen lovers among us.

The CF Black is a two piece composite bat with a big barrel, great connection piece and light swing. It is the exact same bat as the 2019 CF Zen but with a new color design and slightly new name.