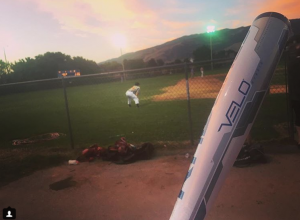 Aside from the color design, there are no considerable differences between the 2018 VELO and the 2017 version, including our opinion that it is a great buy.


We used the 2018 BBCOR version of the bat in a few tournaments across several different players with nearly unanimous approval. Our hitters like the loud sound, light swing, and real stiff feel. Some hitters didn’t think it had the power of some other bats, but our exit speeds showed differently. They preferred the grip on the Velo over most bats.

The Rawlings Velo was the first bat to use variable wall thickness to create a lighter swinging bat with a bigger barrel in the aluminum space.

Since, however, many have flat copied the idea. And although none of those copy-cats have added the POP 2.0 groove to their bat’s inside (like the VELO did for the 2017 and beyond models), we consider those others at least somewhat comparable bats.

There are no differences, aside from the color, between the 2017 and 2018 Rawlings VELO.

We should note, however, the size offerings are different. The VELO can be found in a USAbat this year, and last year those did not exist.

The Rawlings VELO is a single piece bat that uses variable wall thickness and a groove on the inside of the barrel to create a light swinging bat with a big barrel.

Using clever means to decrease swing weight while maintaining durability and barrel size is the principal task of bat engineers. The Rawlings VELO pioneered the technique of using variable wall thickness to accomplish a bigger barrel without affecting swing weight. In the 2017 version, Rawlings rolled out POP 2.0 technology (their term, not ours) which removes even more volume from the inner barrel by creating a groove lengthwise inside the barrel. This managed to drop the swing weight even lower while leaving room for a larger barrel.

Without argument, the VELO is the most advanced aluminum bat on the market.