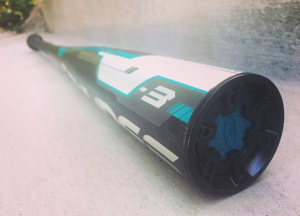 We recommend it to the value purchase player and/or the elite hitter who wants a traditional stiff feel with a slightly heavier swinging bat. After hours in the cage and a few games with a few different hitters we put together our 2018 Rawlings 5150 Review.


The 2018 Rawlings 5150 is a classically designed single piece aluminum bat with enough innovation to consider it a performance bat.

Here are some bullet points describing who may or may not like the Rawlings 5150.

There are a lot of single piece aluminum bats on the market. None, however, use the POP 2.0 tech that adds a laser groove on the inner barrel.

Some, however, do use variable wall thickness to produce a larger barrel and a lighter swing spot. We would suggest the following to bats as competitors to the 5150 market share. Those include:

Although no changes in construction, there are differences in sizing options. In particular, the addition of the USAbat model is significant. We discuss those under the sizing section of this article.

The 5150 uses a single piece of aluminum to create a stiff feeling and slightly end-loaded swing. Although most vendors consider this in the “balanced” section, as it is, one should not confuse it with the light swing of a Rawlings VELO or DeMarini CF Zen, for example. The 5150 swings markedly heavier than those bats but not quite as heavy as bats like the Easton Z-Core XL or Louisville Slugger 718 Select.

What makes the 5150 unique, and helps drive the well sized barrel, is the use of a tapered inner barrel. That is, if you were to cut the barrel in half you’d see the bat used different levels of thickness along the barrel wall. This variable wall thickness is tuned to deliver high performance off the center of the barrel, decrease mass and allow for a larger barrel without sacrificing swing speed.

Additionally, as was new to the 2017 Rawlings 5150, ​Rawlings created a laser groove down the horizontal portion of the inner barrel. This groove further reduces swing weight without sacrificing durability. And, as such, allows for a more dialed in swing weight with an even larger barrel still.