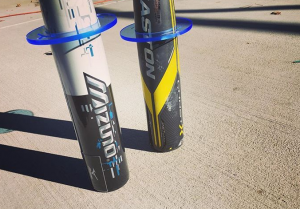 The two-piece composite space is filled with high-performing —and high-priced —bat options. These include the 918 series from Slugger, the Zen from DeMarini, the Ghost from Easton, the Quatro from Rawlings and the Avenge from Axe.

But, in terms of a single-piece composite, the Ghost stands almost alone. There is the hyperwhip from Easton and a late USA Rawlings release called the threat. But those aren’t meant to compete with the Ghost from Mizuno. Those are lower-priced and smaller barreled bats. The Ghost from Mizuno really tries to capture the Combat MAXUM market.


We have spent hours and hours dissecting the features of the 2018 Mizuno Ghost. This is a new bat for Mizuno in 2018, designed like many of the high end bats in the space, but with a twist.  That is, they use floating rings in the bat’s barrel to help increase barrel size and expand the length of the sweet spot. We share some recommendations and insights in our 2018 Mizuno Ghost Review below.

Two issues will make you hesitate on the Ghost. First is the plethora of bats with similar general construction designs. No doubt, the ringed nature of the inner barrel on the Ghost is unique, but the externally large barrel is not unique to the space. As such, the Ghost might be a fine choice for your needs, but how to decide between that and the half dozen other similarly priced and designed bats? Maybe flip a coin.

Second, the bat is not inexpensive. Sure, the price is not different than other bats in its space. Frankly, we have a hard time wholeheartedly recommending a bat that has exactly zero years of pedigree, yet asks the same price as others who do. For all we know, Mizuno knocked it out of the park with the first iteration of the Ghost. But, it’s more likely the bat needs some tweaking, and that will take a year or two to figure out. Yet in the meantime, we are supposed to pay the same for this bat as we do other long-term brands with a track record? Definitely, a reason to hesitate, we think.

There are no fewer than 5 major brands that offer a two-piece composite bat with a big barrel. DeMarini offers a CF Zen. Slugger offers a 918 Prime. Easton makes the Ghost X. Rawlings makes a Quatro. Axe’s version is called the Avenge. And, now, Mizuno’s two-piece composite with a big barrel, a light swing, and an outrageous price point (they all are) is called the Ghost.

In other words, if you would like to compare a similar bat to the Ghost, in the 2018 class you have no shortage of options.

At its core, the 2018 Mizuno Ghost is a two-piece composite bat built with a large barrel and a light swing. The barrel is very large, and depending on the length, often ranks among the very largest on the market for 2018.

The Ghost’s most unique feature is the use of two rings within the barrel. These rings allow for a longer barrel that can also pass the restriction test.

Rings inside of bat barrels are not new. A lot of fastpitch bats do it too. In the baseball space, the 2018 Rawlings Quatro uses an elongated ring-type feature at the end of its barrel. DeMarini’s retooled CF Zen also uses a type of governing ring.

Other companies, like Easton and Marucci, would claim the rings compensate for a lack of engineering. They also increase swing weight by putting more mass in the barrel. Mizuno would counter that rings can extend the length of the usable sweet spot.

From a pure performance standpoint, which approaches you to take doesn’t matter that much. And we’ve yet to see any data that convince us one way is better than the other.