2018 Marucci Hex Alloy Review | We Got a Screamer 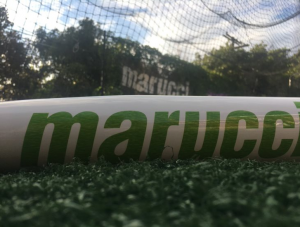 Marucci upgraded their Hex Alloy with a new barrel, more focused balance, and some sizing options in a 2018 version. This is a welcome addition to the 2018 line of big barrel bats and delivers a nice middle ground bat for those not quite willing to splurge on a CAT 7, but want to be in the performance bat space. After extensive use, serious cage time, and conversations with major vendors and the manufacturer, we put together this 2018 Marucci Hex Alloy 2 review.


In terms of quality, the 2018 Marucci Hex Alloy sits somewhere between the CAT 7 and the Marucci F5, but it also fills in a size the CAT 7 does not come in*. That is, the Hex Alloy only comes in a USSSA 2 3/4 drop 10.  If that is your niche, and you want a CAT 7, then we would recommend the Hex Alloy as a reasonable, and less expensive, substitute.

*The Buster Posey Pro Metal bat is technically a CAT 7 in a drop 10 2 3/4. These, however, are limited in quantity.

Note, too, this bat uses an upgraded alloy from the 2015 version of the bat with the same name. And that upgraded alloy makes a monster barrel with a very loud ping. Like, very loud. It does not, however, come with the same anti-vibration knob that has helped make the CAT 7 as famous as it is. Here are some general guidelines as to who we think will and will not like the Marucci Hex Alloy.

Value Purchase.The Hex Alloy is a good subsititute for someone who thinks they might really like the CAT 7 but would like to save a few bucks in the drop 10 2 3/4 space. Prefer a stiff feel. Willing to manage some vibration in the hands on mishits in exchange for honest feedback. Hot out of the wrapper and a massive sound. Need a drop 10 2 3/4 USSSA Bat.

Outside of the Marucci line, we could argue the most comparable bat is the Rawlings VELO. Both bats are light swinging and big barrel bats made for the drop 10 space.

However, the Rawlings VELO does swing lighter as the composite end cap and variable wall thickness, as well as its shorter barrel, all lend to an easier bat to top out on swing speed. The VELO also comes in a number of other sizes instead of just a drop 10 2 3/4.

Inside the Marucci line, both the F5 and the Marucci CAT 7 are comparable bats. Both use variable wall thickness and are single piece aluminum bats. But, consider the F5 as a multi-size option and an entry level performance while the CAT 7 competes, in both price and performance, with the top tier of bats on the planet. The Hex Alloy is squarely in the middle.

If you are committed to a single piece aluminum from Marucci, then your decision will come down to what size you are looking for and how much you are willing to spend.

Compared to the 2015/16 version of this bat, which we affectionately called the skittle, the 2018 Marucci Hex Alloy 2 boasts a larger barrel with a slightly lower swing weight. This is made possible by thinning out the barrel walls with a more expensive aluminum alloy.

The bat will continue to be made in the drop 10 2 3/4 Senior barrel bat. Our guess is this will find a lot of takers. But the 2 1/4 youth barrel bat will not exist in the 2018 version. The reasons for this are obvious enough: Little League is no longer using BPF 1.15 bats, but instead are moving to a USABat standard. From our conversations with Marucci, they will not be making a USABat anytime soon and likely anytime ever.