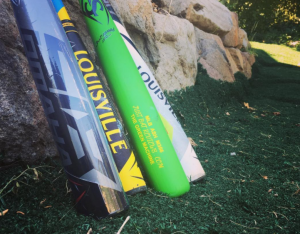 We had an exclusive sneak peak at the Louisville Slugger 518 Omaha. The bat comes with a few upgrades when compared to the 517 Omaha.


The 2018 model is a stiff bat with a big barrel and very little apologizes for hand ring. If you’re up for gripping and ripping, want a smart value buy then we think you’ll like it. It performs right at the BBCOR standard and you can expect to get great performance here. Don’t be fooled by newer bats. BBCOR standards have leveled the playing field for quite some time.

There are several single piece aluminum bats on the market today. In terms of structure, the most similar, or at least one of them, is the DeMarini Voodoo One.

Both of these bats have very similar swing weights, are made for the stiff feel and good power transfer. As well, both come in a number of sizing options. And both are aluminum bats built with the same price point and market in mind.

The most signficant upgrade from the 2017 Omaha to the 2018 Omaha is the change in the end cap. End caps, often overlooked, deliver good perofmrnace through the end of the barrel as well as increase durability. Also, end caps play a significant roll in swing weight. As, without surprise, weight added to the end of a bat effects swing weight more than any other factor.

Slugger’s new 518 6-point end cap enhances the bats balance point and increases durability. It theory, at least, it extends the sweet spot too.

We are not foaming at the mouth convinced this is a true upgrade in terms of performance. But, if both the 517 and 518 were the same price we would prefer the 518 for this reason alone. How much someone should pay for the improved end cap will be a personal decision.

From the 2016 516 to the 2017 517 the alloy on the Omaha went through a considerable upgrade. That alloy allowed for a larger barrel without hurting durability or an increase in swing weight. That same alloy (Slugger calls this the 7U1+ alloy) is found in the 518 Omaha too.

As we mention above, the major difference between the 2017 517 Omaha and the 2018 518 Omaha is the use of a different end cap. the 2018 version uses an newer composite that allows for a better sweet spot towards the end cap and a little more durability.

Ultimately, however, the 517 was a really great single piece aluminum bat. And the idea that an end cap somehow changed the nature of the beast is silliness. The 518 is the very close relative of the 517 and we’d struggle to suggest, with a straight face, the bats are different.