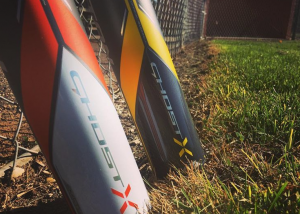 Our hitters generally liked the USSSA version of the bat. In fact, the drop 5 2 3/4 USSSA version is a monster and one of our favorite drop 5’s out there. The drop 10 is a solid bat recommendable for serious players who like a two piece composite but don’t want the CF Zen. The USA version of the bat has something wrong with it (as many of our hitters and others online have pointed out). It rings the hands in an unconventional way and doesn’t feel right off the bat for many hitters. There are some that have had positive experiences with the bat but we were not one of them.


Easton’s flagship baseball bat line for 2018 is the Easton Ghost X. The Mako is no longer. We have watched players swing the new Ghost X at length. The USSSA drop 5 is highly recommendable. The drop 10 and BBCOR versions are solid. The USA version of the bat is, to put it mildly, difficult to recommend due to some strange vibration issues it creates in the hands. Easton never quite admitted as much, but when we and a number of others hit the bat it just didn’t feel right.

The Ghost X recommendation for 2018 depends on what class of bat you are looking for. Generally, the BBCOR and USSSA versions of the bats are highly recommendable. The USA version in the drop 10 struggles to impress. But, the drop 8 and 5 USA Ghost X are decent bats.

In terms of a two piece composite bat with a light swing, robust model offering and prestigious pedigree, you’ll struggle to find a bat similar to the Ghost X. The arguable competitor is DeMarini’s CF Zen. Others may very well add in the 917 Prime from Louisville Slugger, but we think that a stretch.

In terms of overall set up, the 2018 Ghost X and 2017 Mako Beast are similar. That is, they are both two piece composite bats with a big barrel and a light swing.

For the record, the MAKO Beast had one of the largest barrels on the market in 2017. So, the 2018 Ghost X having a barrel just as big, if not ever so slightly bigger, means it is still huge.

As well, Easton claims to have updated the connective piece. It is no longer the CXN which has been on the MAKO since its inception. Instead, it is referred to as connection+. The idea is a more durable connective piece via some redesigned innards.

The Ghost X is a two piece composite bat built with a big barrel and a light swing. Depending on the drop, the barrel size tends to be larger than average. It comes in a number of sizes and drop options. It is, for all intents and purposes, Easton’s flagship bat for 2018.

It uses a connection piece called the CXN and delivers generally good feel on contact in the BBCOR and USSSA spaces.