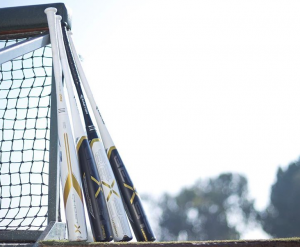 
That is, the Beast X is a line of single piece aluminum bats that come in a light (speed) or heavy (loaded) swing speed. There is a subset of the Beast X that is referred to as the Hybrid, but we review that elsewhere. After extensive use with the Beast X, we put together this 2018 Easton Beast X Review.

Easton, in predictable fashion, has a whole slew of bats for every size and player. One of those, lost in the mix when first released in September of 2017, is the Easton Beast X USA Bat. To clear any confusion, this bat is not the Beast X Hybrid USA Bat, which we have great things to say about. Nor is it the Easton Beast X Hyperlite USA Bat, which we also have things to say about.

Finding a single piece aluminum bat is as easy as going to your local big box store. In fact, most cheap bats are made just like that. But anyone who has spent time with a performance alloy bat when compared to a cheap $50 Walmart bat knows darn well that the top shelf bats are just different. The barrels are larger, the swing weight distributed perfectly.

In that high class category of single piece aluminum there are fewer options. But, for sure, there are plenty to choose from.

We would put the 2018 DeMarini One as closely related to the Z-Core Speed as any bat out there. It is a light swinging single piece aluminum bat with a good sized barrel.​

Slugger also makes a single piece aluminum with a decent sized barrel called the Omaha 518. Worth considering if this is your wheelhouse.

Although a considerable name change, which makes the two bat lines almost unrecognizable, the truth is the 2017 Z-Core and the 2018 Beast X are very similar bats. Easton did upgraded some of the aluminum properties in the Beast X to add some durability. But it didn’t change the already large barrel size of the Z-Core. Nor did it affect the swing weight when comparing the Speed and XL versions of the line.

The biggest change was a redesign of the two piece connective piece, but that only affected the Hybrid versions of the Beast X/Z-Core. We will discuss that in our review of that bat.

The Beast X is a single piece aluminum bat. It is made with Easton’s most elite alloy (which is good). But, the bat runs in a number of different lengths, weights and leagues. They also have a version called the Hybrid which is a two piece bat.

In any event, make sure you know which version you are buying as plenty of bats in the market today go by the Easton Beast X.