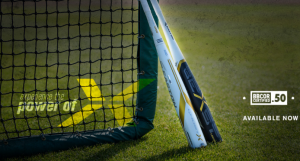 
This is, for all intents and purposes, the new version of the 2017 Easton Z-Core Hybrid. We took the new Beast X Hybrid for a spin in both the BBCOR and USABat versions. That feedback, combined with our experience with the 2017 and 2016 versions of this bat put us in a place to write this 2018 Easton Beast X Hybrid Review.

As a general rule, we like the idea of hybrid bats (and the Beast X) for those who: Prefer hot out of the wrapper performance; Like the more buttery smash of a two piece bat.

Amazon eBay JustBats
The 2018 Easton Beast X Hybrid is a two-piece bat with a composite handle and aluminum barrel. The bat has an end load that makes it feel like a drop 8, but for the first year of USA bats the range of swing weights was expected to be big---and this definitely falls on the heavier side of things.
Sizing: 29, 30, 31, 32-inch
Release Date: August 1, 2017
Serial: YBB18BXH10
Bat Type: Hybrid
Barrel Size: 2 5/8
See other Drop 10 USA Bats Bats

A slightly end loaded two piece hybrid bat in the performance space is not common. We think Demarini’s Voodoo in the balanced version might be the closest in terms of a proven workhorse with a smooth smash and a great performing barrel. The Voodoo Balanced also comes in a BBCOR and USABat, as well as some USSSA options.

For an off the beaten path option that is built similarly, take a look at the Axe Elite.

Do note, too, in the BBCOR and USABat niche, no hybrid bat comes with as large a barrel as the Easton Beast X Hybrid.

Functionally, it is hard to make the argument the 2018 Beast X Hybrid is considerably different than the 2017 Z-Core Hybrid. They both use the same Z-Core barrel that was made famous in the 2016 version.

The barrel size was upgraded from the 2016 Z-Core Hybrid, so we shy away from that version if at all possible. Although prices on that 2016, at the time of this writing, are very attractive.

In terms of marketing appeal and some minor upgrades, the 2018 Beast X Hybrid does come equipped with a new name for its barrel. The alloy is an upgrade, in Easton’s view at least, in terms of durability and performance.

The 2018 Easton Beast X Hybrid is made from a composite handle welded to an aluminum barrel. The barrel is remarkably large—especially compared to other bats of its type.

Easton has used the same connective piece, roughly, since they made the Mako back in 2014. This is referred to as a Connection+ (used to be CXN). It does an industry standard job of creating enough give for a smooth smash, but keeping power in the stroke.

Durability is rarely a cocen for hybrid bats. Especially when the company making the bat has been producing it for several years. Easton has produced a hybrid bat in the BBCOR space for as long as we can remember. In other words, durability should be of no concern.