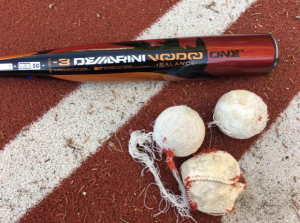 We have now spent considerable time both in the cage and during games with the 2018 DeMarini Voodoo One balanced. It is a light swinging version of the older Voodoo Insane and does really well against a bat like the Rawlings VELO.

Why You Might Like: The price—or a performance space bat the Voodoo One reaches more players’ bottom lines; Stiff, singe piece bat delivers great power transfer to the ball; Hot out of the wrapper means no work in period—you know it’s ready to rock on day one. Why You Might Not Like: Barrel size could be larger, but it is not small; Although the light swing helps generate; Control and bat speed, it works against you in terms of overall power; Although hand ring was not a serious concern with our testers, do know that single piece aluminum bats tend to ring the hands more on mishits than the buttery feel of two piece bats

Amazon eBay JustBats
The 2018 DeMarini Voodoo Balanced is a single-piece bat built with a moderately sized barrel and a light swing weight. Hitters who want a stiff feel and as much bat speed as they can muster should like this guy. It's similar to bats like the Rawlings VELO, Slugger Solo and Easton Fuze. The bat hasn't changed much over the years. It is a no-frills bat built to hit baseballs in a durable and dependable way.
Sizing: 30, 31, 32, 33, 34-inch
Release Date: August 1, 2017
Serial: WTDXVOC18
Bat Type: Single Piece Alloy
Barrel Size: 2 5/8
See other BBCOR Bats

Amazon eBay JustBats
2018 was the first year of USA bats and this is DeMarini's first run on the single-piece Voodoo One. It's a very small barrel profile on a single piece alloy bat. This bat didn't get fantastic ratings as few players liked the small sweet spot and wring on the mishits. However, those looking for an entry-level USA bat at a great price with a good company might find a lot of success with the 2018 DeMarini Voodoo One USA Drop 10 bat.
Sizing: 29, 30, 31, 32-inch
Release Date: August 1, 2017
Serial: WTDXUO2
Bat Type: Single Piece Alloy
Barrel Size: 2 5/8
See other Drop 10 USA Bats Bats 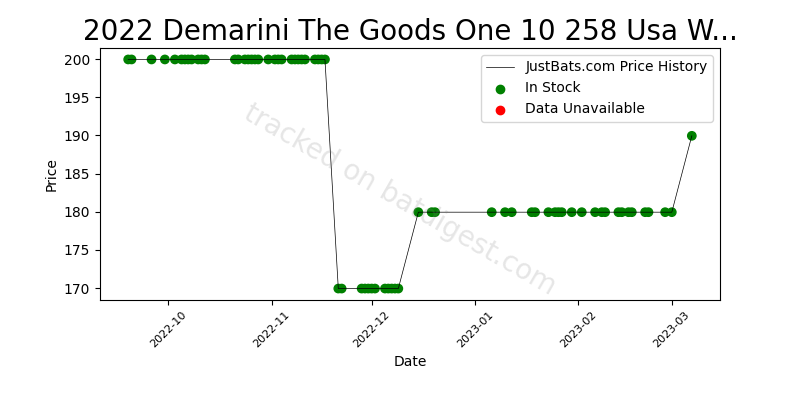 Amazon eBay JustBats
The 2018 Demarini Voodoo one is a balanced single-piece bat with a 2 3/4 reasonably sized barrel. It swings about as heavy as other drop 10 USSSA bats, does hurt your hands on mishits, but also has a stiff feel for those who really square one up. The bat has not changed much over the years and serves that entry-level performance bat space. Compared to older and newer versions of this model, the 2018 DeMarini Voodoo One is as good as any.
Sizing: 29, 30, 31, 32-inch
Release Date: August 1, 2017
Serial: WTDXVOZ
Bat Type: Single Piece Alloy
Barrel Size: 2 3/4
See other Drop 10 USSSA Bats

In terms of a single piece aluminum bat the world is your oyster. There are literally dozens of cheap and not so cheap single piece bats on the market today.

If you narrow those down by ones claiming to be in the performance space and those that have a light swing weight, the list gets much smaller.

One bat that still fits the bill is the 2018 Louisville Slugger 517 Omaha. It, like the Voodoo One, comes in a number of sizes and focuses on a lighter swing within a single piece aluminum bat.

There are other similarly priced single piece aluminum bats. Those, like the Rawlings VELO and Marucci CAT 7, also use some variable wall thickness and unique tech in the handle or knob to be different enough that we would keep them off the comparable list.

In terms of overall performance, barrel size and swing weight, there are no considerable differences between the 2018 and 2017 models. The 2017 model, especially in the BBCOR space, was a rock star of a bat. The vast majority of individual reviews, including our own review, were glowing. For the right type of hitter the 2017 Voodoo One Balanced was a perfect fit. We expect it to be no different for the 2018 model.

DeMarini refers to this alumimnum as a X14 alloy. It is the same material used in the 2017 bat. The alloy is a reference to an aluminum with different additives. Those additives are often proprietary to the companies that make them and are used to create a more durable bat without sacrificing swing weight and barrel size.