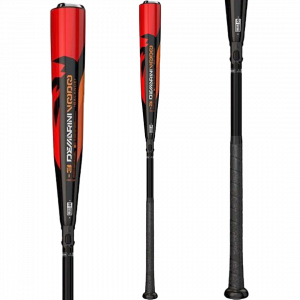 We hit the 2018 Voodoo Balanced a lot. We also compared it to some of the greats. In the end, we found the 2018 Voodoo can hold its own compared to any BBCOR bat in the space. They’ve met the BBCOR limit and the bat, in the right hands, can sing. The 2018 Voodoo also has a loaded version that looks just about like the balanced version other than the word Insane on the barrel.


We recommend the bat to any hitter looking for a top shelf hybrid baseball bat. By our estimation it stands in very small company of top shelf hybrid bats. Throw in the fact it focuses on a balanced swing weight and it may stand alone. Below is our 2018 DeMarini Voodoo Balanced Review.

Hitters who appreciate an aluminum barrel, lighter swing and top shelf smooth feel will love the Voodoo Balanced. The fact this bat has been around, in some form or another, the DeMarini line is proof of its success. It is the most popular hybrid bat on the market today and we see no reason for that to change come 2018.

We can think of no hybrid bat whose focus is on a more balanced swing. Some would argue that Easton’s Z-Core Hybrid would fall into this category. Although we think the Hybrid has a bit of an end load, we would have a hard time disagreeing with those that also considered it a balanced bat.

The 2018 version of the Easton Z-Core is referred to as the Z-Core Hybrid Beast X. At the time of this writing that bat is not yet available so it is impossible to measure real swing weights compared to the Voodoo Balanced.

We know the Voodoo Balanced will be offered in more sizes than the Easton Z-Core Hybrid Beast X. ​

The only difference between the 2017 and 2018 DeMarini Voodoo is the connective piece. In 2017 it was referred to as the D-Fusion handle. The 2018 model has a slimmed down version of the D-Fusion referred to as the 3 Fusion. Less bulk in the connective piece allows DeMarini to use the weight in other places to reinforce performance and durability without effecting swing weight.

Otherwise, the bat is the same between 2017 and 2018. This year’s model uses the same aluminum barrel and the same composite handle as is found in the 2017 Voodoo Balanced.​

Not much has changed in the traditional Demarini Voodoo (hybrid) line of bats. DeMarini has produced a high end two piece hybrid, under the same bat line name, longer than anyone we have been keeping track of.

There is a reason for that.

Few companies have perfected any bat like DeMarini has honed in a two piece hybrid stick. And we have yet to pick up a hybrid Voodoo from Demarini that we did not love one way or the other.

DeMarini did, we should note, upgrade their connective piece from a D-Fusion to the 3-Fusion this year (compared to 2017). The new design removed some bulk and weight from the connective piece and allowed engineers to add more of that mass in areas that could use more durability and performance.