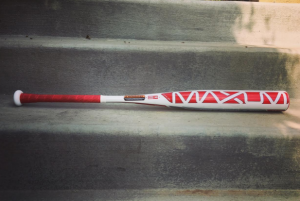 Cage work and a few games with the BBCOR 2018 Combat MAXUM, as well as a couple conversations with major vendors on the bat, put us in a spot to publish a review.


On the whole, the bat serves the needs of the single piece composite BBCOR realm. Although not changed at all from the 2017 version, the Resurrection of this bat via Easton, after the collapse of Combat, is a marked sign as to the general consumer love of this big barreled bat.

There are very few single piece full composite bats in the baseball space. The other most popular single piece composite is a Louisville Slugger Catalyst. However, that bat does not come in a BBCOR. Most would argue the MAXUM is in a different category than the Catalyst. The Catalyst, although made of full single piece of composite, does not have nearly the same barrel size as the MAXUM.

Off the beaten path, a company called Dirty South Bats makes a comparable Combat type bat. In some circles they are very popular. Their Senior League bats are big barrel single piece composites with generally positive feedback from users.​

Aside from the paint job, there are no differences between the 2018 and 2017 Combat MAXUM.

After the bankruptcy of Combat’s parent company, most thought we would never see a Combat bat again. However, Easton, who is owned by that same parent company but survived the proceedings, picked up the Combat Maxum and reproduced it for this year.

How that will proceed in the future is, we would guess, entirely dependent upon how well the sales of the 2018 Combat MAXUM go.​

the 2019 Combat Maxum is a single piece composite bat built with a huge barrel and a moderate swing weight. Expect a huge smash if you can barrel one up. Also, over the years, they have proved some excellent durability too.