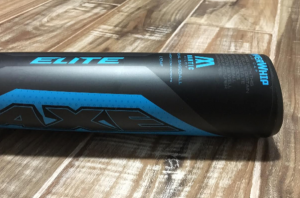 After a few hours in the cage, a few at the field, and a number of conversations with major vendors and the manufacturer, we take a swing at our 2018 Axe Elite Review.


The bat is a two piece hybrid bat built with an endload. The unique knob and endcap lend to a memorable experience. Below we make a number of recommendations and offer our insights.

The Axe Elite is built with a very specific player in mind—a stronger, elite hitting type that likes the soft smash of a two piece composite.

Obviously, there is nothing in the market with an asymmetric end cap and knob that uses a hybrid design. Such things are reserved only for the Axe line of bats.

But, in terms of an endloaded two piece hybrid bat, you have a few options. The first that comes to mind is the DeMarini Voodoo. It comes in both an endloaded (Insane) and balanced version.

The Voodoo is a well mannered, known commodity in the hybrid sapce and has been in the market for years. This stands as the most known two piece hybrid bat, and if you are in the market for a hybrid, it is worth a look. Compared to the 2017 Elite, there are no considerable changes. Both 2017 and 2018 Elites use a composite handle and a “Mantic” alloy in the barrel. They come in a USSSA drop 5 and 8 as well as a BBCOR drop 3.

As well, the bat is still built with a heavier swing in mind. That is, expect it to work well for bigger and stronger hitters who like hot out of the wrapper bats.

The major difference between the two years is the addition of a USABat in the lineup for 2018. That two piece bat is a drop 5.

The other remarkable feature of the 2018 Elite is the asymmetric end cap. The oval shaped knob forces contact on only one side of the barrel. This ability to predict where impact occurs gives Axe engineers some liberty in shaving volume and weight off the backside of the barrel. This design, which they call the Hyperwhip, is found on all of their performance bats for 2018. As such, you’ll find the hyperwhip feature on every Axe Elite bat for 2018.

Lost in all the hoopla of the asymmetric end cap and knob is the fact the Elite is a two piece hybrid bat, too. It is a traditional two piece hybrid with a composite end cap and aluminum barrel. These features lend to a smooth smash and a hot out of the wrapper performance.