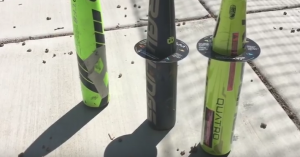 If we are talking the single piece aluminum space with a light swing weight, then Louisville Slugger’s 517 Omaha is the most comparable. Both emphasize hot out of the wrapper performance, noticeable feedback on mishits and direct power delivery to the ball. Both bats come in a plethora of models and sizes, have massive distribution and are appreciated by some of the best in the metal bat game.


We spent some time discussing the changes in the 2017 5150 when compared to the 2016 5150 with those in the know. We have also taken the 5150 to the cage for over 500 hacks among several different players. Add this to our experience with the new 2017 Quatro and the other 2017 Rawlings baseball bats, and our evaluation of previous years’ Rawlings 5150 feedback, and we feel comfortable publishing our 2017 Rawlings 5150 review. As more data is gathered throughout the year, we will keep this write-up updated.

The 5150 is a good enough bat to be considered part of the performance space, but lacks a lot of the features that drive other performance bat prices to the top shelf. The right hitter should prefer the 5150 over most other bats. That right hitter, we suggest, looks like this:

Other bats people could claim are similar might be the new Adidas Aeroburner single-piece stick. This swings a noticeable amount heavier than the 5150 (or 517), but the idea is the same.

From 2015 to 2016 the 5150 went through major overhauls. In particular, they added a composite end cap to the 5150 in an attempt to make its swing weight lower. The idea did indeed work, and a similar innovation was used in the VELO and TRIO in years past. Additionally, the 2016 line brought a two piece 5150 into the hybrid space called, rather sans creativity, the 5150 Hybrid.

2017’s 5150 lineup is more like the 2015 versions than the 2016 versions. That is, there is no hybrid version and the composite end cap has been removed. As such, the 2017 5150 swings heavier than the 2016 version. Vendors and Rawlings still consider the 5150 ‘balanced’, but note that it swings heavier than last year’s model. It is still not quite end loaded enough to be considered an end loaded bat.

The 5150 will be a single piece aluminum alloy bat. The emphasis will be the 5150’s legacy: a large aluminum barrel that is hot out of the wrapper. Peak performance without any work in period is what makes this a very popular bat among collegiate teams.

The bat does not swing as light as many two piece composite ‘balanced’ bats, but for a single piece alloy, it is one of the lightest. This is possible, at least in part, due to an innovation Rawlings implemented two years ago in both the VELO and 5150: they taper the thickness of the barrel wall. The thicker part is toward the middle while the thinner parts are toward the ends. This not only expands the usable sweet spot, but also gives engineers a chance to increase barrel size without increasing swing weight.

Other than those features, the 5150 is a classic single piece alloy bat with just enough innovation to make it interesting.