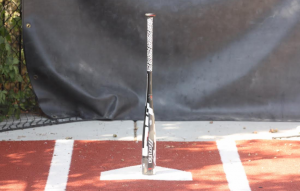 On the whole, we find the 2017 Generations a worthy upgrade from the 2016. Its lighter swing and more solid sound should play well with the bat’s target player. These benefits are all made possible by a newly weighted and constructed end cap. We dive into those details below.


Our 2017 Mizuno Generations bat review comes on the heels of 3 hours of cage work with the bat. We used several different types of hitters at many different levels of the sport. We took those hitters’ direct feedback and combined it with our extensive knowledge base and experience with every major performance bat in the market over the last three and half years. Then, we reviewed our 2015 and 2016 Mizuno Generations write-ups. As well, we exchanged emails with Mizuno’s team to clarify some of the 2017 Generations’ upgrades. That data came together in the following 2017 Mizuno Generations review.

Our experience has found that single-piece alloy bats with a light swing are most appropriate for young players who have yet to generate bat speed or see pitch speed, that can ring hands considerably. If that is not you, then it’s likely you’ll find more success with a different bat. As such, we’d hesitate on the 2017 Mizuno Generations if we were:

Like previous years’ models, the 2017 Mizuno Generations is a single-piece alloy bat with a balanced swing. As such, there is a certain niche in the market where this bat fits nicely. The elite-level player won’t find much happiness in this bat. But, we would recommend the bat to players who:

There are a number of single-piece alloy bats on the market. Few, however, attempt to play in the performance space with upgraded features like tapered walls, helix-designed handles, and end cap upgrades. These design features are what drive the price upwards of a single-piece alloy in the ‘performance’ space versus the alloy bat you can find at your local Walmart.

In the realm of ‘performance single piece alloys,’ the main competitor should be Louisville Sluggers 51X series of bats (Our Review). Like the Generations, Slugger’s single-piece alloy comes in a variety of sizes. The Generations, by our measurements, does have a lighter swing weight. Adidas makes an Aero Burner bat for 2017. It could be considered similar but does swing heavier and comes in a BBCOR only.

The end cap may be the most overlooked element in bat purchasing. We’d guess many players and parents haven’t paid much attention to the end of the barrel anywhere near the knob, grip, transition, and barrel size. But, it’s worth knowing, that the end cap plays a significant role in successful hitting.

With those thoughts in mind, the 2017 Generations is noticeably different than the 2016 version for one simple reason: the end cap is completely redesigned. The cap is lighter and less dense which gives the bat a lighter swing weight (MOI) and a darker sound when hit. Mizuno will claim it also produces better results towards the end cap but we have no way to confirm that. We do accept the theory. Either way, a new end cap attributes to a more serious improvement over the 2016 version.

With the exception of the end cap, which we discuss below, the 2017 Generations is largely the same when compared to the 2016 Generations. It is still a one piece alloy bat with a tapered inner barrel wall to expand the sweet spot. As well, the handle uses a unique helix type design to help dampen stings on mishits.