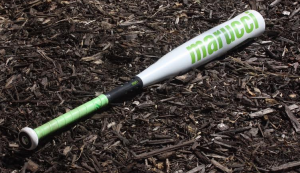 Our 2017 Marucci Hex Connect review comes on the heels of three 13U tournaments and no less than 1000 hacks in a cage with the bat. We used it with big hitters, small hitters, good hitters, and bad hitters. We’ve spent time trading emails with the manufacturers and a couple of major vendors, downloading their take. We’ve made some videos of the bat in the cage and at un-boxing. This background, combined with the now thousands of hours we have spent reviewing and writing about baseball and softball bats contribute to the following 2017 Marucci Hex Connect review.

The Hex Connect is built for the player looking for maximum barrel size and a light swing. It also provides a smooth drive on contact due to its new connective design. These features make the bat appealing to a large selection of players in the big barrel space. Those who prefer one-piece designs, aluminum barrels, or very stiff transitions with a lot of feedback were not as in love with this bat.

Amazon eBay JustBats
At its heart, the 2017 Hex Connect is a two-piece composite bat with a focus on a low swing MOI (swing weight) and a large barrel. This general construction theme, which other bat companies also implement in their top-shelf bats, delivers the most barrel size per swing weight. When done right, a remarkable degree of forgiveness in terms of sting dampening in the hands mishits, is provided by the design. Our experience with Hex Connect verifies this.
Sizing: 28, 29, 30, 31, 32-inch
Release Date: October 1, 2016
Serial: MSBHCX10
Bat Type: Two Piece Composite
Barrel Size: 2 3/4
See other Drop 10 USSSA Bats

Amazon eBay JustBats
Marucci's most innovative function on the bat's design is the manner in which the handle and barrel are seamed together. Unlike anyone else, Marucci uses a spiral connection to screw the bat pieces together. The idea is that more surface area connecting the barrel to the handle more easily dissipates vibration from mishits traveling from the barrel to the hands. This makes enough sense to our non-engineering minds to accept it out of hand. The idea is implemented in the 2017 CAT 7 Connect as well.
Sizing: 28, 29, 30, 31, 32-inch
Release Date: October 1, 2016
Serial: MSBHCY10
Bat Type: Two Piece Composite
Barrel Size: 2 3/4
See other Drop 10 USSSA Bats

All major bat companies, save Combat, produce a top-shelf two-piece composite bat whose focus is a big barrel and a light swing. The Easton MAKO, DeMarini CF sets, and Louisville Slugger’s 917 Prime are three of the most common examples. As such, those three bats are comparable to the Hex Connect.

Further, the 917 from Slugger also uses a unique connective design, like the Marucci Hex Connect, to encourage sting dampening. Slugger calls this their TRU3 (you can see that explanation here). This makes the Slugger’s 917 the most comparable bat to the 2017 Marucci Hex Connect.

In 2015, Marucci released a bat called the Marucci HEX Composite. This was a single-piece composite bat with a monster barrel. We are big fans. The Hex Connect, we could argue, is just a step away from the 2015 Hex. Its stark difference is the two-piece nature of the bat and the added tech inside the connective piece.

Outside of that stretch comparison, it’s reasonable to suggest the Hex Connect is a new bat altogether from Marucci. Their foray into the gigantic two-piece composite space with an oversized barrel and light swing isn’t surprising at all.

The Hex will NOT be released in a BBCOR. Rather, only a Senior League (2 5/8) and Big Barrel  (2 3/4) version in a drop 10. High school and collegiate players might be disappointed by that news, but they should remember Marucci’s big push in the drop 3 space is the Marucci CAT 7 and the new Marucci CAT 7 Connect. If it’s the soft feel Marucci’s new two-piece design players are after, the same connective SDX tech found in the Hex Connect can be found in the CAT 7 Connect which does come in BBCOR.