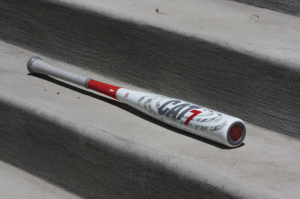 We’ve also spent some time discussing the bat with it’s manufacturers and reading everything the internet has to offer on the bat this early in the game. On the whole, this new balanced hybrid was preferred by hitters who appreciate the ring of aluminum at contact, want a slightly more end loaded bat (when compared to the 2016 CAT 7) and prefer the forgiveness of hand ring found in a composite barrel. We can confirm Marucci’s claim about a larger sweet spot when compared to the 2015 CAT 6.

Mid to heavy swing weight hybrid bats, like the CAT 7 Connect, have some serious competition. The 716 Select from Louisville Slugger is what we would consider the CAT 7 Connect’s most serious competitor. Both are stiff transition hybrids with good durability and a considerable sweet spot. The 716, as we write elsewhere, is as well received a hybrid as the bat world has ever seen.

From a design perspective, the Mizuno NightHawk is quite similar in it’s two piece hybrid design with variable wall thickness to expand the sweet spot. Swing weights are also similar.

Other mid to heavy swinging performance hybrid bats that are worth a look are the DeMarini Voodoo Raw, the Easton Z-Core Hybrid XL and, although a bit off the beaten path, the 2016 Axe Elite.

The CAT 7 Connect is a hybrid bat. The aluminum barrel is massively upgraded from the 2016 CAT 6’s barrel and is thinned internally as it expands away from the center. This tapering creates a greater trampoline effect away from the barrel’s center which, in turn, makes a longer sweet spot. Other bat companies (like the Rawlings VELO and Mizuno NightHawk) have used this technique before with very good reviews.

The composite handle is riveted into the Connects barrel through a threading process. The insert, at least as claimed by Marucci, helps dampen sting and keep the vibration on mishits in the barrel instead of your hands. Our experience appeared to confirm this.