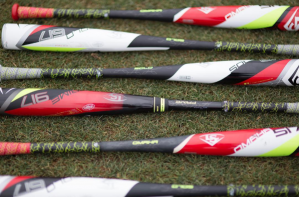 On October 20th, the 2017 Louisville Slugger 617 Solo was released. We spent time on the phone with major vendors discussing expectations for the bat as well as testing the bat over the course of a season. Here is our review.

As we are yet to hit with the bat, or get its swing weight and barrel measurements, it is difficult to give full blown recommendations. When more details are gathered we will give stronger recommendations.

The advancement of single piece hybrid bats have been the most robust in the entire industry. The 617 is Slugger’s response to the demand of players looking for a single piece feel without losing the swing weight and barrel size of a two piece composite.

Other companies have tried similar ideas. The VELO from Rawlings, it could be argued, pioneered the space of single piece bats with composite end cap. Axe Bats also produces a single piece aluminum bat with a composite end cap. Those two stand out, at least on paper, as similar constructions to the 617 Solo from Slugger. Time will tell us much more in terms of durability, performance and player uptake.

There was no last year’s version of the 617 Solo. It is the first of the single piece hybrid bats Slugger has made.