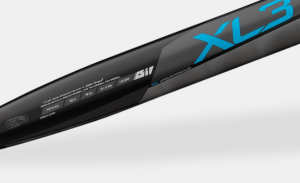 
The 2017 Easton XL3 is a reprint of the 2016 version. The bat is made as a single piece of aluminum intended for strong hitters who like an end-loaded feel. Our testing shows significant feedback on mishits (i.e. sting), but some hitters appreciate the ability to find the sweet spot. The Easton XL3 lies squarely on the bottom shelf of performance bats. Those looking for a value purchase who appreciate an end-loaded single-piece aluminum might find it’s just the stick they’ve been looking for.

We recommend the 2017 Easton XL3 for players who:

We would not recommend the 2017 Easton XL3 for players who:

*The “Indian not the Arrow” philosophy subscribes to the idea that the bat doesn’t matter, only the hitter’s skills do. Some take this to the extreme and claim the bat has no bearing whatsoever on plate performance.

Another endloaded single-piece bat is the 2017 Axe Element (our review)—although that bat has several things going on that make it a less comparable alternative to the Easton XL3.

The XL3 has been a part of Easton’s lineup for longer than we have been writing on this blog. That bat served as the 3rd iteration in the end-loaded Power Brigade. The XL1 was a two-piece composite and is now enveloped by the Easton MAKO XL—which was not produced in an XL for 2017. The XL2 has morphed into the Easton HYBRID XL—which was also not produced in an XL for 2017. In the BBCOR space, the XL3 is now the Easton Z-Core XL (which you can read our review of here).

With the obvious exception of the color-up, the 2017 Easton XL3 is a reprint of the 2016 version. The bat is a single-piece aluminum with an end load. For a bat of this structure, it does boast a good-sized barrel. This is its unique feature in the space.