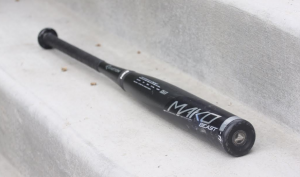 We have spent a lot of time over the last several weeks getting ready for this review.


We’d guess no less than 4 hours in the cage, two tournaments among several different hitters, the Little League World Series, consulting our 2015 and 2016 Easton MAKO reviews and our 2017 Easton Lineup to put together this review.

The Beast is a proven workhorse. Although it never quite got to CF status in USSSA, it’s 2 1/4 version was legit and the BBCOR Easton MAKO Beast was a reasonable option for the light swinging two-piece composite lover.

In the two piece composite space there several options. Both the 917 Prime from Slugger and the CF Zen from DeMarini are a lot like the Easton Mako Beast. All of them have big barrels, swing light and come in a number of sizes. In terms of user reviews the DeMarini is the most mixed as it had some durability issues (but absolutely raked the ball).

Compared to the 2016 Easton MAKO we didn’t find any remarkable changes (at least in the 2 5/8 version). Easton has claimed in a few YouTube videos the Beast barrel is the ‘hottest’ ever and such a claim would be impossible for us to measure.

Some have written to us claiming the compression tests on the Beast’s barrel have come back different than MAKOs in years past. This would imply Easton has done something differently, but implying it now out performs a 2015 and 2016 version, which were straight out crazy hot, is too far fetched for us. The MAKO in the last several years has been the bat to beat in terms of on field performance. That will be no different for 2017.

Like previous years’ models, the 2017 Easton MAKO Beast is a two piece composite bat with a focus on a massive barrel and a light swing weight. However, in the BBCOR space, the 2017 barrel is larger than last year’s version. In the Big Barrel or Youth Barrel space, the barrel size will be the same.

In both BBCOR, Big Barrel and Youth Barrel, the bat composition is still the TCT composite Easton has been using for at least a couple years now. The connective piece (CXN) is still reasonably stiff and allows for good vibration absorption without any noticeable loss in power.