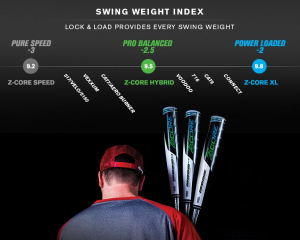 For almost a year, the Lock & Load from Easton has been the subject of rumor. Now, in May of 2017, we are stoked to see it go live. We now have experience with this BBCOR only bat that comes with the unique feature of swing weight adjustment.

We have spent several months drooling over the specs and possibilities of the Easton Lock and Load. Our biggest reservation has been the complexity of the process for changing the bat’s swing weight. After some use, and a number of conversations with serious players about the bat’s effectiveness, we address that and other concerns below.

Leaving aside the adjustable swing weights for a moment, the Lock and Load is a single piece Z-Core bat. Although a slightly different and smaller barrel profile, the bat is made exactly like the Easton Z-Core Speed and XL Series of bats (that we review here). That is, the bat’s base is a single piece aluminum with a large sweet spot and a considerable, hot out of the wrapper, barrel.

Although it likely goes without saying, no bat in the baseball space has the ability to adjust its swing weight. The Z-Core Lock & Load is built on the chassis of the Z-Core bat line from Easton. If we were therefore forced to find a similar bat, we would go that route.

In once sentence, the Z-Core Lock & Load is a single piece aluminum bat with a large barrel and the ability to increase the swing weight from an industry low, a middle ground and an industry high swing weight.